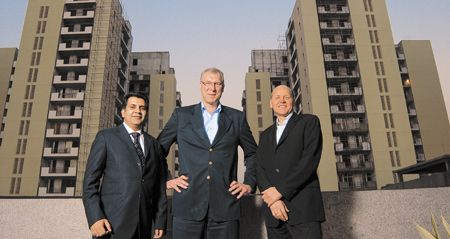 The message is stark, though perhaps unintended. If you happened to pass through Bangalore’s spanking new international airport sometime last month, you could not have missed the massive advertising panel over the row of check-in counters. The panel, at 297 ft X 1.6 ft possibly the largest brand hoarding at any airport, displayed the logo and brand tagline — ab mera number hai (it’s my turn now) — of Norwegian-Indian joint venture Uninor, the ninth company to launch mobile phone services in India. Says Ann Hofvander, executive vice-president of Uninor, Karnataka: “We believe that it (the hoarding) will go a long way towards enhancing our brand visibility.”

With this advertisement, and a spate of other brand building activities and strategic moves, Uninor — a 67:25 joint venture between Norway’s leading telecom operator Telenor and Indian real estate major Unitech — is keen to showcase its seriousness about India’s mobile phone services market, the world’s second-largest with 575 million subscribers, and growing at 60 per cent per annum. Already, the company has shown it can move fast.
In December, within 22 months of getting UASL (universal access service licence) to launch GSM mobile services in all 22 of India’s telecom circles, it launched services in eight circles — Andhra Pradesh, Bihar, Jharkhand, Kerala, Tamil Nadu, Uttar Pradesh (East), UP (West) and Orissa was added to the list on 22 December 2009.
By December-end, Uninor had garnered 1.2 million subscribers — 6.28 per cent of the 19.10 million new subscribers for the industry that month. “We will continue to build on our positioning, pricing and distribution to secure new subscribers as we focus on customer experience to keep our customers with Uninor,” says Stein-Erik Vellan, managing director of Uninor. He adds, “While we will certainly be competitive on delivering value for money, we believe competition must not only be on pricing. While listening closely to our customer’s wishes, our long-term focus will be on quality. And we’re in this business for the long haul.”
A TALE OF TWO FIRMS
Unitech Wireless
Unitech Wireless is promoted by leading real estate company Unitech. It holds a pan-India universal access service (UAS) licence to offer mobile telephony services in each of India’s 22 circles. It has also received spectrum to roll out these services in 21 of the 22 circles.
Telenor
Telenor Group is a Norwaybased company that is also the world’s sixth-largest mobile services provider. It took less than two decades for the company to become one of the world’s largest mobile providers.
Vellan is well aware of the challenges that lie ahead for Uninor in its quest to garner 8 per cent market share in eight years. It has to face up to entrenched incumbents, fight bitter battles for consumers’ rupees, and have a lot of money just to stay in the race. The company is banking heavily on the deep pockets, resources and know-how of majority stakeholder Telenor, the world’s sixth-largest telco with several decades, experience of managing telecom networks and placed very high in terms of subscriber numbers in most markets it is present in (see ‘Spreading Its Wings’ on page 48). Uninor will need to draw a fair bit on that pedigree as it embarks on a long, arduous journey in India.
The Revenue Challenge
The biggest challenge for Uninor will be the battle to gain subscribers. Here, it will square up against the likes of Bharti Airtel (125 million subscribers at last count), Vodafone (93 million), Reliance Communications or RCom (95 million), Tata Teleservices (60 million) and Idea (59 million). “There is direct competition with five major operators in circles across the country for the top slot,” says Ravi Visvesvaraya Prasad, an independent telecom analyst based in Delhi. It will also have to contend with other aggressive newcomers such as Tata DoCoMo, Etisalat DB and S Tel.
Click here to view enlarged image
In fact, it was Tata DoCoMo that started the latest price war by launching its one paisa per second tariff plan in June 2009, which was promptly emulated by others such as RCom, Vodafone and Idea. Even market leader Bharti Airtel, which has said it would focus now on high ARPU (average revenue per user) customers, is simultaneously offering the per-second plan.
Uninor, however, will have nothing to do with that tariff plan. “With falling ARPUs, we are not in that segment of the game,” says Rohit Chandra, executive vice-president for operations at Uninor. “For us it would be the mid- and high-end users.” Sigve Brekke, executive vice-president and head of Telenor Asia, adds that to be a leader, Uninor need not focus on beating the established players on subscriber numbers or a tariff that promotes a rat race. Instead, the company has launched two tariff plans with per-minute billing aimed at high-end consumers.
Analysts are sceptical. A Citibank analyst says: “Uninor’s tariffs are neither disruptive nor simple, and hence may not be a runaway success.” Adds Lena Osterberg, an analyst with Carnegie Investment Bank AB: “If Uninor is successful with its segmentation strategy, it will attract higher users, but that remains to be seen.”
Tags assigned to this article:
magazine m rajendran sanjay chandra unitech uninor sigve brekke telenor stein erik vellan