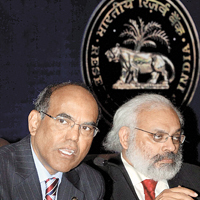 08 November, 2014
Print this article Font size -16+
It’s official. No one knows what to do about controlling inflation —possibly the No. 1 policy problem in the country. At a seminar on 1 December at the Indira Gandhi Institute of Development Research in Mumbai, Reserve Bank of India (RBI) governor Duvvuri Subbarao posed a provocative question to three of his predecessors: should 7 per cent inflation (it is currently considered too high) be treated as the new normal? The question came at the prodding of his immediate predecessor Y.V. Reddy, who suggested that the central bank review its position on the appropriate level of inflation that the RBI should target. Bimal Jalan, from whom Reddy took over the helm of the RBI, was even more provocative: he said the RBI should give up the notion that it could control inflation at all.

The only defence of the 5 per cent inflation target — which seemed to have been carved in stone — came from C. Rangarajan, chairman of the Prime Minister’s Economic Advisory Council, and who preceded Jalan as RBI governor. Not only did he consider 5 per cent appropriate, he also held that inflation control should be the dominant objective of monetary policy.

The timing of the question is appropriate for two reasons. First, 5 per cent may have been in alignment with the 2 per cent inflation target in developed economies in the 1990s and the 2000s, but the global economy is structurally differently post the global crisis, which provoked Olivier Blanchard, chief economist of the International Monetary Fund (considered by many to the world's central bank) to say that there was nothing sacrosanct about the 2 per cent inflation number.

Second, despite a number of rather aggressive tightening measures, the RBI has been unable to make even a small dent in inflation or inflationary expectations. So asking the question about the ‘new normal’ ahead of the third quarter review of monetary policy on 18 December seems appropriate.

It’s a little unclear at this time what the new normal will mean for immediate policy action. It’s unlikely to mean a policy rate cut — it’ll be too soon for that — but some more cuts in the reserve requirements, particularly the cash reserve ratio, seem more likely. Some analysts even expect them. But it could mean a whole new way of thinking about monetary policy strategy.