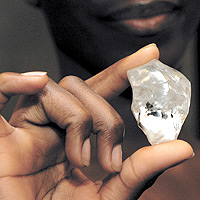 But a recent find by the mining giant Rio Tinto promises to change this. During drilling and prospecting at Bunder in Madhya Pradesh in 2004, the company had discovered a web of pipes, which it claims could hold the biggest diamond find in the world in the past 10 years.

The Bunder Project
Rio Tinto began exploring for diamonds across various sites in India in the mid-1990s. In the early reconnaissance, the company located some finds in the Bunder area in 2004.

"The Bunder project was granted a prospecting licence in 2006. Since then, we have progressed to what is known as a pre-feasibility stage. Early studies have proven an inferred resource of 27.4 million carats of diamonds," says Stefanie Loader, Rio Tinto's Bunder project director. Industry sources say this translates to an annual value of roughs in the region of $300 million, assuming a life span of 15 years for the mine.

A company report says the Bunder project includes a cluster of eight lamproite pipes hosted by flat-lying sedimentary rocks. Drilling and sampling has focused on the Atri lamproite, two coalesced pipes with a surface area of 17 hectares. The study indicates that the Atri pipe is amenable to conventional open pit mining and normal diamond processing technology.

Commercial production is still some time away. Typically, it takes about a decade from discovery of a diamond resource to commercial production, says Loader. "The next critical milestone is the mining lease, which we applied for in June 2008. Our application has been recommended by the state government to the government of India for approval in October 2009," she adds.

The company expects to pump in Rs 2,200 crore till commercial production kicks off. So far, Rs 185 crore has been invested with a monthly ramp up of Rs 22 crore per month. Loader asserts that Bunder is Rio Tinto's most advanced project worldwide.

S. Vijay Kumar, secretary, Ministry of Mines, is non-committal about how long it would take for Rio Tinto to get its mining lease, but says if there is no litigation involving the company, it would probably be a routine procedure known as ‘priority by exclusion' under Section 11 (1) of the Mines and  Minerals (Development & Regulation) Act.

Interestingly, the last two big finds on the diamond map are now more than a decade old, and both have Rio Tinto as a majority stake holder. The Diavik Mine in Canada began exploration work in 1992, and started commercial production in January 2003. The Murowa mines in Zimbabwe began exploration work in 1997 and started small commercial operations in 2004. Ever since, there have been no significant finds.

India In The Diamond Chain
Over the years, India has emerged as the world's workshop for cutting and polishing diamonds. An estimated 850,000 workers toil away in Surat and other centres producing diamonds for use in precision industrial equipment and jewellery. Trade figures reveal India exported Rs 1,09,971 crore worth of cut and polished diamonds in calendar 2010. That's 65 per cent of the total value of gems and jewellery exports from India.

Despite the recession and despite exports and manufacturing units being hard hit, diamond exports grew at a steady clip — 4.2 per cent in FY 2009 and 28 per cent in FY 2010. Significantly, gem and jewellery exports accounted for 17 per cent of the country's total merchandise exports estimated at Rs 8,35,264 crore.

But compared to these humongous export figures, India today is a negligible producer of roughs. The official worldwide monitor of the industry — the Kimberley Process Certification Scheme (KPCS), in its global summary for 2009 said India produced a meagre 9,317 carats of diamonds worth $1.66 million. Most of these are sourced from the public sector National Mineral Development Corporation (NMDC) mines at Panna in Madhya Pradesh. The company in September 2010 announced an auction of roughs from its refurbished mines worth a minuscule Rs 5 crore.

In FY2010, Indian manufacturing units imported nearly 150 million carats of roughs valued around Rs 42,500 crore, 60 per cent of these roughs being sourced through Belgium. Without doubt, India is the largest importer of roughs by a wide margin.

The Looming Shortage
"Jewellery always has demand even in the worst of times. After 9/11, the US strangely saw a spike in jewellery sales as couples gifted each other jewellery as a symbol of affection in times of depression," says Praveen Pandya, chairman of Diamond India, an alliance for sourcing roughs with 58 diamond manufacturers as members.

However, economic surveys point to difficult times for the diamond industry. A KPMG report released in 2006 on the Indian gems and jewellery trade projected that worldwide jewellery sales would rise from $146 billion to around $230 billion in 2015. With rising sales of alternative luxury goods and the introduction of synthetic diamonds, the report predicts a slowdown from a growth rate of 5.2 per cent CAGR till 2005 to 4.6 per cent in the 2010-15. Among the slowest growing segments would be diamond jewellery at around 3.3 per cent.


A major reason for the possible slowdown is the looming shortage of roughs, concedes Pandya. "Sources for diamond roughs are stagnant, and it takes 10 years to get a mine going." Concurs Vasant Mehta, former chairman of the Gem & Jewellery Export Promotion Council and vice-president of the International Diamond Manufacturers Association (IDMA): "Mines are drying up, and there has been no major find in the last decade."

A major supply constraint over the years has been the political controls exercised over "conflict diamonds". To prevent rogue regimes committing human rights violations using diamond money, KPCS was established about a decade ago as a world-wide monitor for ‘cleansing' the sale of roughs. This has, for instance, blocked sales from Zimbabwe's Marange mines.

It is no wonder that the polishing and cutting industry in India wants the government to ensure that Indian units have the first right of purchase for the Bunder roughs. "The mining lease should be linked to Rio Tinto signing a deal that the diamonds should be used in India," demands Vasant Mehta. The government is understandably wary of such a demand. With Indian units accounting for 80 per cent of the world's cut and polished diamonds, it was but natural that Rio Tinto's roughs would find their way to the Indian companies, says S. Vijay Kumar. "There are no special clauses for mining leases for iron ore and other minerals; so why should we have one for diamonds?" he asks.

All Eyes On Bunder
To deal with the problem of sourcing a steady stream of roughs, diamond manufacturers in India have formed consortiums of buyers to push through purchase of large consignments. Pandya's Diamond India (DIL) is one such consortium. "If we have the financial backing, we can pick up goods worth $100 million in one go," says IDMA's Mehta. "We are also developing direct sourcing of diamonds from companies like Alrosa."

The shortage is only going to grow with new markets opening up for jewellery. For instance, exports to the US hogged a lion's share earlier. But not any longer, as India and China's local jewellery buying is on the roll with increased purchasing power. By 2015, China with 13 per cent and India 12 per cent of the world's jewellery consumption, will together emerge as a market equivalent to that of the US's share of 26 per cent, predicts the KPMG report.

Given the difficulties of sourcing roughs by the cutting and polishing trade, it is not surprising that the developments at Bunder are being watched with great interest. Rio Tinto's Loader says the State Support Agreement her company has signed with the Madhya Pradesh government would pave the way for developing a world-class diamond facility. "Once production commences, the Bunder project will place Madhya Pradesh in the top 10 diamond producing regions worldwide," she says.

With inputs from Meera Mohanty