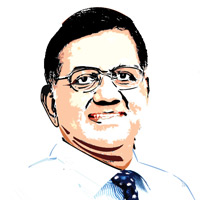 Deepak Seth: Chairman
Company: House of Pearl Fashions
Worth (Rs crore) on 30 March 2012: 106.17
Worth (Rs crore) on 31 March 2011: 61.22
Absolute difference (in Rs crore): 44.95
% change: 73.43
Deepak Seth is the man behind what House of Pearl Fashions is today. He has taken the company from a single manufacturing unit in India to 12 locations across the world, including sourcing businesses in Hong Kong, Bangladesh and China, new manufacturing units in Bangladesh and Indonesia, and acquired businesses in the UK and the US. He has diversified the company's business from only manufacturing to outsourcing. Seth can always sense an opportunity — even in an economic slowdown globally. He is betting big on supply and demand chain-led consolidations.

S.S. Mundra: Chairman & MD
Company: M AND B Switchgears
Worth (Rs crore) on 30 March 2012: 100.74
Worth (Rs crore) on 31 March 2011: Not available
Absolute difference(in Rs cr): Not applicable
% change: Not applicable
Shyam Sunder Mundra-promoted M AND B Switchgears shot to fame when it became the proud recipient of the country's first solar Renewable Energy Certificate or REC when the National Load Dispatch Centre, New Delhi, issued 249 certificates to it. The value of Mundra's stake in the company was Rs 100.74 crore in FY2012. In 2010-11, its turnover was Rs 37 crore, on which it made a net profit of Rs 77 lakh. For the first nine months of 2011-12, the company's turnover was Rs 18 crore, and net profit Rs 32 lakh. The Indore-based company has a 2 MW solar photovoltaic power plant at Rajgarh district in Madhya Pradesh, which marks the company's foray into the solar energy sector. In 2012-13, this plant is expected to generate about 3,250 RECs. In FY2013, Mundra is targeting a topline growth of 40-50 per cent for his company.

N.K. Sureka: Chairman and MD
Company: Tuni Textile Mills
Worth (Rs crore) on 30 March 2012: 216.99
Worth (Rs crore) on 31 March 2011: 7.69
Absolute difference(in Rs crore): 209.29
% change: 2,719.99
Technological advancements and changing demands have created many opportunities in the textile sector. Narendra Kumar Sureka was quick to recognise this trend and set up a synthetic fabric plant at Thane, Maharashtra, as far back as in 1989, for the manufacture of shirting fabric as well as texturised yarn. However, unlike many of his peers, Sureka has chosen to source fabric from 300 other looms as this keeps the company's operations nimble. The company, which was set up in 1987, listed in November 1992. Its plant today manufactures around 7.5 million metre of fabric per annum, and employs 41 people. Sureka's stewardship has seen Tuni Textile Mills' market capitalisation rise to Rs 999 crore as on 30 March 2012 from Rs 354 crore a year earlier. A long way indeed for a company that was declared a sick undertaking in 2002.

J.P. Purohit: CMD
Company: Unisys Softwares & Holding Inds
Worth (Rs crore)on 30 March 2012: 119.17
Worth (Rs crore) on 31 March 2011: 67.74
Absolute difference (in Rs crore): 51.42
% change: 75.91
Fiscal 2012 has been a good year for Jagdish Prasad Purohit. His company unisys softwares & holdings industries, which is engaged in software trading, investment in shares and securities and non-banking financial companies' activities, saw its revenue shoot up to Rs 210.36 crore as on 30 March 2012 from Rs 133.05 crore as on 31 March last year. While the numbers may not be big enough compared to the a-listers, they nevertheless show a significant growth. Purohit's company's market cap also shot up by an impressive 76 per cent to Rs 493 crore in FY 2012 from Rs 280.26 crore in the last fiscal.