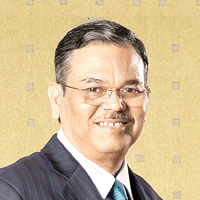 08 November, 2014
Print this article Font size -16+
Looking back over the last couple of years, M.D. Mallya, chairman and managing director of Bank of Baroda, believes that period presented some challenging conditions, but also opportunities. For Bank of Baroda (it was the fastest-growing large bank in last year’s survey), that translated into strongly implementing some initiatives Mallya’s predecessors had put in place a couple of years before the global credit crisis of 2007-08.

And it was not just what the bank did, but how. First, segmentation was a key strategy, dividing the portfolio into clear verticals and building specialisation. For each of these verticals, they built a centralised processing cell; that led to better marketing, higher quality of origination and better credit quality.

“We built a loan factory,” says Mallya with a smile. Bank of Baroda pays a lot of attention to continuous monitoring. The bank’s appraisal skills were improved and advanced, training given to people fairly early, developing specialised skill sets. Finally, risk management was accorded high priority, and the bank made strategic choices that lowered delinquencies significantly.

The bank identified four areas to power growth: retail, small and medium enterprises, rural entrepreneurs and international business. “Credit to corporate borrowers decreased in the last couple of years, but has gone up for the rest,” Mallya says. For example, the share of SMEs in the portfolio went up from 14 per cent to 17 per cent. Rural loans moved from 15 per cent to 18 per cent; retail from 16 per cent to 18 per cent, while large corporate loans declined to about 40 per cent.

Growth in its international business has been particularly strong. When foreign banks in home countries battened down their hatches, sources of finance for Indian companies operating there dried up quickly. That allowed Bank of Baroda to step in and make inroads where foreign banks were hesitant to do so.

But what of the recent spike in non-performing loans, or NPLs? Mallya admits the pain will continue — Bank of Baroda did account for a large amount of NPLs in the first two quarters of 2012-13. But he believes it will not be as much as the rest of the industry is having to face, or will, in coming quarters. “We have had our challenges,” he says. “But given our initiatives on asset quality and management over the past 5-6 years, our delinquencies will be lower, and accretion to NPLs will not be very large.”

Some of his competitors acknowledge his adherence to those standards. “It is unlikely that his successor will find some undiscovered problems in the loan portfolio,” says the head of a leading Mumbai-based financial services firm. “What he sees will be what he gets.”

Mallya retires at the end of November this year, capping a long and exemplary career with this award. As he goes back to work after talking to BW (he had just presided over the bank’s Diwali puja before that), he is quick to point out that what was achieved during his tenure was on the shoulders of his predecessors. “It’s a legacy I will pass on,” says the man who takes his last few days at work as seriously as his first.