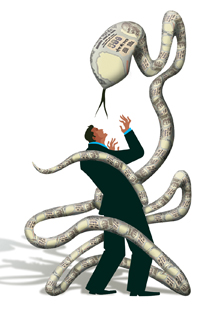 The financial year 2008-09 was expected to be a year of belt-tightening for corporate India. At least, a half year of belt-tightening given that the slowdown really hit in the second half of the year. In the first half, the exuberance of the previous fiscal continued, as India Inc. kept up its borrowing spree to finance capacity expansions, acquisitions and build-up in inventories even as the rumbles of a recession could be heard from developed markets. When the slowdown hit Indian shores, companies quickly shifted gears, and looked to cut costs and borrowings.

But by then, too many companies were already stuck with huge loans, though, as James H. Quigley, CEO of accounting and consulting firm Deloitte Touche Tohmatsu, says, the levels of borrowing were not as excessive as in western countries such as the US, UK, Spain and Ireland (see interview on page 80). So, while India Inc. tried to reduce fresh borrowings and restructure debt, the amount of money paid out as interest on loans increased significantly, even as cash flows and revenues fell. An analysis of the FY 2008-09 results of the top 1,000 firms — not including financial services firms — from CMIE's Prowess database shows interest payouts were almost 56 per cent higher than in the previous fiscal.

The biggest contributor to the debt was the oil and gas sector, with giants such as Reliance Industries (RIL) and Indian Oil Corporation (IOC) seeing 93.7 per cent and 26.5 per cent spike, respectively, in net loans over the previous year. The loans were meant to fund capital expenditure and new exploration, and more. "Working capital needs and inventory related borrowings also shot up," says Abheek Barua, chief economist at HDFC Bank, adding that the increased cost of borrowing played its part in the rise in interest payouts. Both RIL and IOC, for instance, paid out more money in interest payments than the previous fiscal — 62 per cent and 147.3 per cent more, respectively.

Click here to view (Interest)ing Misadventure and More For Less

In all, loans taken by these 1,000 companies increased the debt on their books by 36.4 per cent in FY 2008-09. The rise in loans was much higher than the increase in total income (19.08 per cent). Profitability was dismal, with operating profits and net profits falling by 1.45 per cent and 13.9 per cent, respectively, no doubt partly because of the increased interest payouts.

With debt skyrocketing, the debt-to-equity ratio (D/E) has become a cause for concern for several companies. Nearly 180 companies of the 1,000 analysed had D/E of more than 2, indicating they have overleveraged themselves. Most large companies, however, have kept D/E under control. RIL, for instance, despite its huge borrowings, had an eminently manageable D/E of 0.64. Then, auto major Tata Motors, which saw its net loans position increase by 110 per cent in 2008-09, still managed a D/E of just over 1. Among others, telecom leader Bharti Airtel had a D/E of 0.28, and engineering major Larsen & Toubro, 0.53, indicating at least the bigger Indian firms have managed the downturn well.

Many companies appear to have raised loans not entirely for their own use. Advances to other companies, including to group firms, increased by 34.6 per cent. Barua says it is possible that some parent companies took loans on their balance sheets to give money to subsidiaries that could not raise money at a time when debt was hard to come by. "With the intensification of the global financial turmoil during H2 FY09, liquidity conditions tightened substantially," says Kaushal Sampat, chief operating officer of Dun & Bradstreet India, adding that ECBs by Indian companies came down to $7.4 billion during H2 FY09 as against $10.96 billion during H1 FY09.

Things seem to have taken a better turn this fiscal, with interest payouts of the first half (April-September) for the 1,000 top companies going up by only 3.5 per cent, indicating a significant reduction in net loans positions. Says Barua: "There has been some deleveraging. Companies have paid back loans, and have not taken too many fresh loans." The impact is evident on profitability, as net profits have climbed 26.5 per cent for the first six months of the year. The top line, though, has shrunk 9.6 per cent.

Both Sampat and Barua say that investment activity is likely to pick up, given the improving business environment. Says Barua: "We are seeing more queries coming in for long-term lending, especially for capex. Year 2009-10 will see some kind of local bottom, followed certainly by a slow increase in borrowings." In other words, even more loans!