The Highway Of Uncertainty 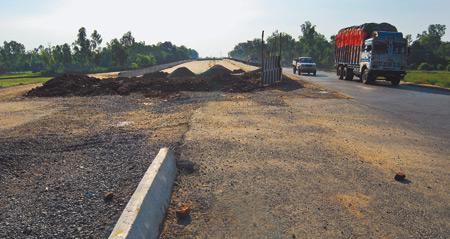 A 30-km stretch of national highway between Nagpur and Amravati in the Vidharba region of Maharashtra is quintessential of India's National Highway Development Programme (NHDP): a single lane (initially planned as four) of potholed road. ‘Men at work' signboards stand out, but no workers are in sight for kilometres. A half-constructed flyover, which was to reduce travel time by 20 minutes, is now a shelter for junked buses and trucks.

India's highway development programme  also faces a similar plight. Bureaucratic turf battles, uninterested state governments and lack of leadership have brought highway rollouts to a naught. On paper, NHDP has seen a close to 10-fold expansion during 2000-05. Started in 1999, with the 5,000-km Golden Quadrilateral (GQ) project (which was to connect the four metros — Delhi, Mumbai, Kolkata and Chennai), NHDP is now supposedly constructing 55,000 km of highways through seven phases. But on the ground, many of the schemes remain as incomplete as the Vidharba stretch.

In recent times, the bane of highway development in India has been a lack of unanimity on a policy to award projects and shortlist bidders. Initially, NHDP Phase I was to convert existing (two-lane) inter-state highways into four-lane highways over the GQ stretch. The contracts to build roads were given to companies by the National Highways Authority of India (NHAI), the nodal agency for implementing NHDP. These works ranged from 30 to 100 km stretches. NHAI had to perform the crucial task of acquiring land for the lane expansion. It also had to collect toll for the recovery of investments. While the government extended all sops, and even created a dedicated central fund for the GQ, the projects faced a bumpy ride — deadlines were missed; contractors did not complete works; state governments did not cooperate. And GQ, which was to be completed by 2004, started lagging behind.

On the flip side, the completed stretches became a showcase of the benefits good roads bring — economic development. That success prompted the erstwhile NDA government to expand NHDP beyond GQ, and it conceived the North-South-East-West (NSEW) corridor (connecting Srinagar, Kanyakumari, Porbandar and Silchar). But there was a change in policy in mid-2000 that required the road projects to be offered to operators on build-own-transfer (BoT) basis. Under this mode, the concessionaire would build, run the road project and earn money through tolls, and transfer the project back to NHAI after the concession period.

Minding MCAs And RFQs
This needed a model agreement outlining the risks, rewards and duties of both NHAI and the BoT operator. While NHAI had already prepared a model concession agreement (MCA) with some modifications, advisor to the deputy chairman of the Planning Commission, Gajendra Haldea, wanted NHAI to consider an MCA he had prepared during his stint with the research institution NCAER, based on the Jaipur-Kishangarh project, the first BoT project under NHDP. This triggered a series of discussions between the transport and finance ministries and the Planning Commission on the controversial clauses, with the final version of the MCA emerging only after two years.

This final version was not only controversial for its stringent clauses (like the requirement on 80 per cent land acquisition), but much to the dislike of many officials, it even had a copyright granted to Haldea. The MCA "is filled with landmines, and is so perfect that it can't be implemented", says an official. "What was the need for a new MCA? No developer had problems with the old MCA, nobody challenged it in the court," asks T.R. Baalu, former road transport minister. While NHDP grew from phase one to seven, there was no unanimous policy to award works. When works were to be awarded in 2007, BoT bidders moved court against the bid documents called request for qualifications (RFQ) that had emerged through long inter-ministerial discussions. "We were spending more time in dealing with policy papers and meetings with Planning Commission than being on the field to resolve ground-level bottlenecks," says former road transport secretary L.K. Joshi.

The clause for shortlisting RFQ caps the number of bidders who could be shortlisted to place price bids. Even if there are 100 bidders in the pre-qualification stage, the clause allowed only six firms to bid. Assigning marks on the basis of the bidders' experience at the pre-qualification stage meant new firms were always at a disadvantage, leaving all projects to be dominated by a handful of big players. Vinayak Chatterjee, chairman of infrastructure consulting firm Feedback Ventures, says these clauses should be applied only to large projects.

As a result, for more than a year starting 2007, about 60 national highway tenders had been on hold, even as a host of highway developers, including the National Highway Builders Federation (NHBF), challenged RFQ. In all, these projects would have resulted in Rs 50,000 crore of investment, says M. Murali of NHBF.

Suneet Maheshwari, chief executive, L&T Infrastructure Finance, says it would help if "the process and documentation was made friendly and more international investor-compliant". For now, there is no end in sight though Road Transport Minister Kamal Nath confirmed to BW (see interview on page 30) that MCAs can be altered: "It is not the Gita or the Bible which can't be changed." Outlining the need for more flexibility in policy documents, Nath says, "We have to have something that is workable (concession agreement, bid documents, etc.) and investor friendly." Even Haldea now agrees with this view (see ‘The Pathbreaker').

Sanjay Sethi, executive director and head of infrastructure, Kotak Investment Banking, says that it appears that for the first two years of the previous UPA regime, the government had taken its eyes off the ball. And when NHAI started offering projects in 2007-08, market conditions had changed. Due to policy delays, about 30 road projects under GQ faced time overruns of over 60 months. In new programmes, the award of contracts was way beyond the targets.

In NHDP II, the achievement for two consecutive years was barely 3 to 5 per cent. And NHAI was barely able to meet 50 per cent of the target of project completion. Besides, NHAI saw as many as five chairmen in five years. Reason: non-performance! Baalu says the changes were necessary. He says in one instance the chairman arrived 35 minutes late for a parliamentary committee meeting.

The Toll And The Way Forward
In a key policy shift, Nath says "projects that are tollable, will be tolled. Those that are not tollable, will not be". Initially, all projects had to bid on the basis of tolls. So, the new move will cut the time taken to bid for projects. But much of this depends on the progress made in award of contract, as there is a huge time lag from the date a project is identified to the date it is awarded. No project was offered in 2007-08 due to legal disputes. Atul Punj, chairman of Punj Lloyd, says NHAI should check unrealistic bidding by contractors, but Sethi says that once a clutch of developers has passed the RFQ stage, but does not finally win the project, these developers should be allowed to participate in price bids for other projects, without having to go through the RFQ process again.

All this is just the tip of the iceberg. States' cooperation in developing NHDP is also vital. Nath plans to link the release of funds to states, from the central road fund, to their role in expediting clearances. Nath has also asked investors to come up with suggestions to make NHDP more investor-friendly. One suggestion, by Ajit Gulabchand, chairman of HCC, is to have a fast dispute resolution system. But here are some hard facts. Even if a few projects are awarded today, they would take more than a year to start. Since no works were awarded for close to a year, expect no fresh roads for two years.