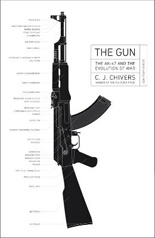 It's light as well as lethal. So light that even a 10-year-old can use it, and so lethal that it had a vital role in almost all the wars in the past few decades. In his new book, journalist C.J. Chivers traces the evolution of AK-47, spotting its place in global arms trade, wars and military technology. A supreme example of micro engineering, AK-47 was first made at the beginning of the Cold War. Chivers book is billed as an alternative history of the world according to the terrible weapon. The book draws on a huge amount of fascinating and original research, and becomes the story of modern violence.