The Goa In Macau 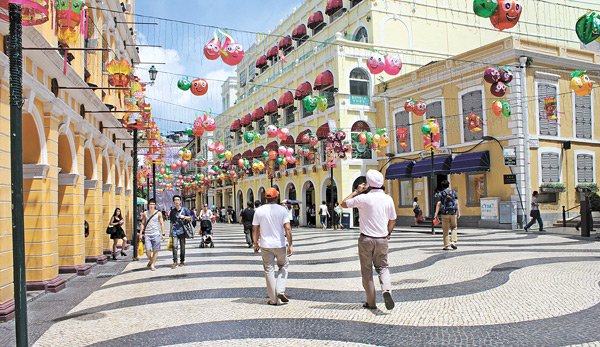 08 November, 2014
Print this article Font size -16+
Off Coloane Square, Macau’s old centre, we’ve been wandering for an hour now through quiet tree-lined lanes with old Portuguese homes, churches and bakeries, so dramatically different from the regular red-lantern-festooned busy streets. With just some vague directions, our destination seems almost impossible to attain. But just as we are about to give up — content to have taken in the sights and smells of an older town; and marvel at the elegance of its peeling, brightly-painted European facades — we finally stumble upon it!
San Lazaro is a quiet neighbourhood, distinctly Portuguese. It reminds us just a little of old Goa. A winding road leads us to Albergue 1601, one of  the city’s best-kept secrets: a Portuguese restaurant and a quaint store selling handmade sabonete (soap; note the similarity with sabun), pottery and bric-a-brac made in Lisbon. The campus has a big camphor tree, with a Magic Faraway Tree air, branches reaching out to other worlds. It may be just that: the portal to this different dimension, so close, yet so far from a Macau of glitz and bling, nightclubs, and blackjack tables where gamblers-at-heart can while away their holidays.
At the Cotai strip where I am staying, the glitzy Macau is very much in evidence. This is Asia’s Vegas; and you can choose your gambling tables at any of the resorts competing for attention. But if bling is not your style, there are other hangout options too. At the new Sheraton Macao, everything spells scale, including the 3,800-plus rooms and 15,000 sq. m of banqueting space. Still, this is a quieter work-cum-leisure retreat on the strip.
I begin my food tour at Xing, their Chinese restaurant, with a hotpot meal, choosing fresh seafood to go into a bubbling soup pot on the table. And at Bene, the all-day diner, where desserts (including custom-made lollies) are to die for, I discover the famous egg tarts, treats that also show up a fusion of two cultures — Portuguese and Chinese — at their best.
If you have been to Hong Kong or indeed any authentic dim sum place anywhere, you would have come across the Guangdong egg tart, supposedly inspired by English custard tarts in Hong Kong, a former British colony. In Macau, these take on a different form, approximating the pasties de nata of the Portuguese, wonderfully caramelised on top and different from the Hong Kong/English versions.
Your most interesting discovery in Macau could be Macanese and Portuguese cuisines rather than a talent for gambling! Whether it is Albergue 1601 that we have hunted for so dedicatedly or Fernando’s in Taipa (the smaller of the two islands that also make up Macau) or A Lorcha (‘The Sailboat’, on the main peninsula, close to the A-Ma temple), restaurants serving these dishes are often hidden in quieter neighbourhoods. But they all serve up a similar menu.
Bacalhau (salted codfish, with hundreds of recipes, a Portuguese staple) is done in different ways in each of these restaurants, sometimes with a localised Macanese twist, with more spice and seasoning and smaller (Chinese-inspired?) cuts. If you want to draw some more colonial connections, they are aplenty here: this indeed is the original balchao, the Goan special we all swear by. The Goan dish today is immediately recognisable with its tangy tomato-chilli sauce but balchao is actually a method of pickling introduced by the Portuguese — a take on the bacalhau.
Many Macanese menus will also serve you Porco Balichao Tamarino, pork cooked in tarmind paste, shrimp paste, chillies and topped off with a dash of sugar — totally reminiscent of balchao!
I also find echoes of another Goan dish, chicken cafreal, on Macau menus. Galinha à africana is a popular dish — whole chicken baked with chillies, garlic and coconut milk. It’s a fusion recipe with a long lineage: arriving with the Portuguese via Africa, where it was a grilled bush dish. In the Goan version, the chicken is fried, not baked, and imbued with tones of coriander, garlic and lime.
And then, there is bread. Like India, China did not have a tradition of baking. In Macau, as in Goa, it was introduced by the Portuguese. And if we got pao as a result, Macau has its polo buns, crispy outside, soft inside, perfect to mop up all those seafood curries with.
Like in Goa, Portugal is alive in many ways in this former colony: in restored churches, old facades of homes and, above all, in fusion recipes that form part of a living culture.
invogue(at)bworldmail(dot)com