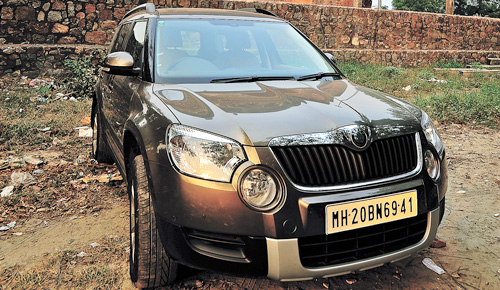 08 November, 2014
Print this article Font size -16+
The first feeling is one of being underwhelmed. The name ‘Yeti' conjures up images of the mythical Himalayan giant, but Skoda's Yeti SUV is anything but gigantic. In fact, Yeti is several inches smaller, particularly in length and height, compared to competing SUVs such as Toyota's Fortuner, Ford's Endeavour and Mitsubishi's Pajero. The small size — because Yeti shares its platform with skoda's Laura and Volkswagen's Jetta — gives it the look of an oversized premium hatchback.

Of course, that is not necessarily a bad thing. Despite its boxy build and despite it not having the menacing road presence of a Fortuner or an Endeavour, Yeti comes across as elegant and cool. The signature front grille reminds you of the Fabia, and the rough-textured, black bumpers remind you of its offroading genes. The large, front fog lamps placed just below the headlights add to its charm, and the wraparound front headlights give it character. The darkish glass between the black C and D pillars seems to fold into the rear windscreen, giving the Yeti a classy look.

The interiors, too, are elegant, as you would expect of a skoda. The wide front windscreen not only gives a great driving view, but (combined with the low bonnet) also gives the driver a very good sense of where the front of the car ends, unlike many other SUVs. However, some of the plastics used inside, particularly on the dashboard and the central console, appear cheap and take away from the premium feel. And while there is a plethora of cubby holes and hooks and nets to keep your treasured belongings, the glove box is quite small. The steering is adjustable for both tilt and height, and so are the seats. The leather seats appear stiff at first, but are very comfortable on long drives. Leg and boot space are ample; the back seats can be slid back to accommodate two six-footers behind one another; they can also be folded down or even removed to increase boot space from 416 litres to 1,485 and 1,665 litres, respectively. Mileage is good — the car gave an average mileage of 16.6 kmpl over the three days I drove it, quite close to skoda's claimed mileage of 17.7 kmpl.

Yeti's small size and light weight have much to do with its mileage, as also with the power it generates from the 2-litre TDI diesel engine, much smaller than the 3-litre hearts of Fortuner and Endeavour. The burst of acceleration, even at low second gear, is enough to make the back seat passengers reach for their seat belts. Overtaking on highways, with measured pressure on the accelerator, is a cinch. Yet, the diesel engine is surprisingly refined; the shivers and tremors are far less compared to others, and only a low chatter and slightly bumpy ride on city roads give away the diesel motor under the hood. The wide, squatty stance (1,793-mm wide compared to 1,788 mm and 1,775 mm for Endeavour and Pajero, respectively, which stand taller as well) gives Yeti great stability while tackling sharp turns. And the four-spoke steering wheel is small, light and precise.

Yeti has a list of features so long that you'll probably take days to figure them all out. For instance, lights under the driver's rear-view mirror flicker on when you open the remote central lock, helping you open the door comfortably in the dark; the climate control system allows different temperatures from the air-conditioner for the driver and the passenger; parking sensors with digital imagery of the car's movements in the touchscreen panel on the central console are accurate. Then, there are the usual seat-belt warning systems, ABS, many airbags, gear-change indicators, high-quality audio system with steering-mounted controls, etc. Yeti also has some offroading capabilities — such as hill descent, where the car's electronics control the speed at which it goes downhill, a 4x4 system that automatically shifts power to the rear wheels on slippery and loose tracks; electronics systems that transfer all power to the remaining wheels if one wheel goes into a spin.

Is it worth buying, then? Well, on the ‘nay' side, at Rs 15.4 lakh and Rs 16.6 lakh (ex-showroom price, Delhi, for Ambiente and Elegance versions, respectively), it feels overpriced. The high price is also a result of the car being assembled in India by importing parts, which attracts tax. Besides, skoda has not brought its petrol 1.2-litre, 1.4-litre, 1.8-litre, and two-wheel drive versions into India. It might bring in the 1.8-litre petrol next year, but there is no word on the smaller, cheaper versions. The overpriced feeling comes through also because the top-end Yeti in India doesn't have tools such as Bluetooth connectivity and GPS navigation, which are fast becoming standard in cars that are much cheaper. It doesn't come with automatic transmission either, and since parts are imported, getting spare parts might be a bother.

And on the ‘aye' side, it has a great engine and good looks; ride quality and manoeuvrability are superb; it has a veritable library of features, most of which are useful rather than gimmicky; it doesn't have the power of a Fortuner or the oh-so-cool looks of a Honda CR-V or the luxury of a BMW X6, but it has elements of all three; and badge skoda has great flaunt value in India. So, again, should you buy it? That, we leave to you.