In his four years of engineering, 28-year-old Paras Chopra, founder of Wingify, launched four startups. In the long summer breaks of Delhi College of Engineering, he didn’t allow himself the luxury of “chilling out”, as it is typical for students on holiday. Instead, he would hatch a new business idea, develop it, and even launch the product. 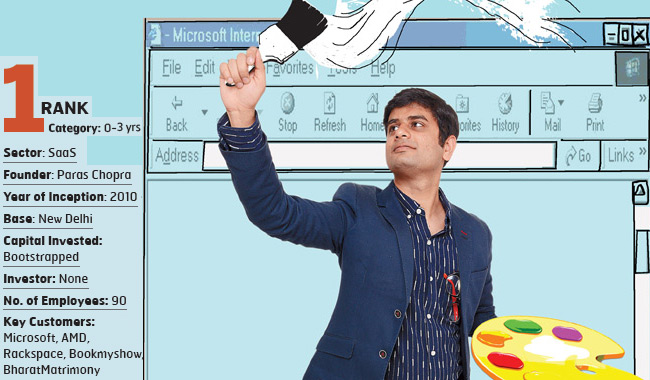 16 June, 2015
Print this article Font size -16+
In his four years of engineering, 28-year-old Paras Chopra, founder of Wingify, launched four startups. In the long summer breaks of Delhi College of Engineering, he didn’t allow himself the luxury of “chilling out”, as it is typical for students on holiday. Instead, he would hatch a new business idea, develop it, and even launch the product.

And then as the semester resumed, he would lose himself in academics and the fledgling company would just lie there, in cold storage. From these four startups, he learnt that a product needs a strong marketing as well.

So, he started taking an interest in marketing and consumer analytics. After his engineering, he joined the Gurgaon-based employability evaluation company Aspiring Minds. And there he began spending his evenings developing a marketing analytics software package, which he named Wingify. In 2009, he spent almost eight months in coding the product, but that too like his initial products, didn’t take off.

“It had too many features. I had developed it from an engineer’s perspective, but its primary users, marketers, didn’t understand it,” he shares. He scrapped the entire package and started developing afresh on a programme that focused on only one feature — A/B testing.

One of the pain points marketers faced is determining what design or content on a website will attract more users, to increase sales. For this, marketers use A/B testing — a software that lets one to run a series of experiments to test and compare which version of a web page is performing better. There was an A/B testing product by Google called Website Optimizer. It is a free tool but marketers could not use it themselves. It is quite complex and requires an understanding of HTML and JavaScript, so marketers had to rely on IT people to run these experiments.

He then started working on a product that would ease the website optimisation process, and developed Visual Website Optimizer (VWO) in just one month time. It is a drag-and-drop editor that doesn’t need any knowledge of programming to launch A/B tests. So, marketers could use it themselves to create different versions of their websites and check which one produced the maximum conversion and sales.

The product was free in its beta phase and it started attracting a lot of users. Patrick McKenzie, a celebrated tech blogger, wrote in his blog Kalzumeus Software that VWO is “so simple it will crush the life out-of-all other solutions for non-technical users”. McKenzie also added, “It solves a clear need for a huge number of small businesses and brings a powerful technique to people, who would have never been able to use it before. Moreover, it does it so disruptively, embarrassingly better than Google does, that it puts a smile on my face.”
break-page-break
Chopra then left his Gurgaon job and launched the paid version of VWO and registered Wingify in May 2010. He started offering VWO on a monthly subscription model that varied from $49 per month for sites with 10,000 monthly visitors to $999 for larger sites. In the first month alone, his one-person company clocked a revenue of $4,000. His salary at Aspiring Minds was Rs 50,000 per month. He made almost four times of that amount. That, he says, helped him justify his startup dream to his parents.

He also started writing about A/B testing on technology blogs, published case studies on websites and used Twitter to spread the utility of A/B testing for businesses.

In fact, within the first three months of its launch, Microsoft became a client. Bas Roozen, then the marketer at Microsoft, in an email to Chopra mentioned, “I have to say it’s really a useful and very user-friendly tool. You have gold in your hands.”

By November 2011, Wingify was already a $1-million company. It had fetched a 1,000-plus clients such as GE, Disney, Red Cross and Bharat Matrimony. That time, it was a team of six people only. The focus on the initial years was primarily on product development and customer support. One of the major innovations, Chopra made to VWO in 2011, was the addition of heatmaps. They help businesses determine the ‘hot’ areas that attract a lot of users on their website and the ‘cold’ areas that get ignored. “We are till date the only company that has heatmaps integrated in an A/B testing tool,” confides Chopra. In 2012, the company hired its first sales person and it started focusing on client visits and customer meetings. He says that in hindsight if we would have focused on building our sales team earlier to get customer feedback and meet potential clients, then we could have grown much faster.

In 2013, it got an acquisition offer from one of the top 10 software companies in the world. “It offered us to pay millions of dollars in double digits,” says Chopra, without divulging the exact amount. The talks went for four months, but he couldn’t get himself to sell Wingify. “I grew up looking at that software company but I didn’t start Wingify to make money. I want to make software that can create impact and add value. Also, I don’t know what to do with so much money.”
This is also the reason why Chopra has completely bootstrapped the venture. He doesn’t want a third party on the board and risk losing the freedom to make decisions. “With investors, it is a legal and moral obligation to make money; otherwise you exit your own company or merge with a bigger one. I don’t want to take those chances with Wingify,” he said.

In September 2014, Wingify acquired the Chicago-based designers community portal Concept Feedback. It is a community of designers for getting feedback on website design and user experience. He didn’t disclose the deal amount. He used the portal services for his own website and liked the suggestions given by them. So, when Concept Feedback CEO Andrew Follett wanted to sell the company, he was keen due to the complementary nature of the products of the two companies. The suggestions given by Concept Feedback could be tested through VWO, and the best suggestions could be used on the websites. They are in the process of integrating the two companies, but for now it is a separate product. Wingify’s customers though can use the basic services of Concept Feedback for free.

They closed FY14-15 with revenues of Rs 44 crore. The company is focusing to tap the US market, so this year in February, it opened its first outside office in the US. And now, it is also planning to open its second office in Europe. It also want to go upmarket and focus more on large companies since till now 80 per cent of its customers are from the small and medium enterprise.

But, what is keeping Chopra excited these days is working on a new product that he is planning to launch this year. All we have to do now is to wait and watch what this young ‘technopreneur’ is up to.