The Flip Side Of NREGS 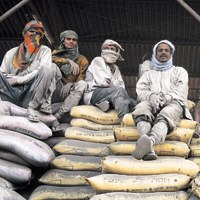 A government scheme aimed at doing good to India's poorest of the poor has created a different problem — a severe shortage of inexpensive labour. For instance, Bihar, which contributes approximately 20 million workers as floating migrant labour, has seen 35 per cent of this population staying back in the villages this time, according to an official of the Bihar government. The phenomenon is not limited to Bihar. Workers from states such as Karnataka, Kerala and Gujarat are also not migrating to other states. Reason: the National Rural Employment Guarantee Scheme (NREGS), which assures 100-day employment to the rural poor at minimum Rs 100 a day, has ensured that poor people have some income to bank on, eliminating the need to move out.

And that has impacted all who depend on migrant, part-time labour for their businesses, from farmer to small entrepreneur to industrialist. Jasmeet Singh, 39, a farmer in Haryana, Ajit Lakhra, 45, a knitter in Ludhiana, Vikram Singh, 38, a leather jacket maker in Agra, and K. Chinappa, a coffee plantation owner in Coorg (Karnataka) are among those affected. Jasmeet, who is ready to pay Rs 1,200-1,500 per acre per labourer (the usual rate is Rs 750) along with "bottles of liquor", had to resort to desperate measures. "I was forced to ask my brothers, who work in Chandigarh, to take leave from their offices and help me in sowing," he says. "I do not know what I will do for the harvest in November." In the previous rabi season, Jasmeet employed 14 labourers in his 12-acre farm.

"We have seen an impact on part-time labour at our factories," says Anil Somalwar, promoter of Involute Technologies, a Rs 100-crore auto component manufacturer in Pune. "Many of the regular part timers have not turned up." However, he is confident that the company's growth would not be affected.

Karnataka-based farm labourers — who generally migrate to Maharashtra and Tamil Nadu — have also stayed home. Across the coffee belts of Karnataka, rubber belts of Kerala, cotton and sugarcane belts in Maharashtra, industries in Gujarat, Tamil Nadu, Maharashtra, or Uttar Pradesh, the labour crunch is hitting hard.

From Jasmeet to Somalwar to Chinappa, all of them agree that the shortage is because of NREGS. Those registered with the scheme get paid regardless of whether there is work or not. Chinappa says even rates as high as Rs 200 a day have proved unattractive, with the NREGS turning out to be an easier way to make money.

For Bihar, though, which contributes the maximum number of migrant labour, other factors have contributed, too. Chief Minister Nitish Kumar has unleashed an array of infrastructure development schemes. So, now that the labourers are getting work in their own backyards, they see no reason to venture out. This is particularly so because according to a Bihar government official, who did not wish to be named, the government is encouraging contractors to hire local labourers at the same wages as in metros or in Punjab and Haryana. The contractors, who need the labourers anyway, are only too happy to oblige.

"If the wages are the same as what we get in other parts of the country, then there is no point in moving away from the family," says Sunil Kumar, 22, a resident of Sitamarhi in Bihar, who earlier used to work in the fields of Punjab and is a beneficiary of NREGS. "This time, neither me, my father, nor any of my uncle's family moved out. We get the payments quicker, and there is no ‘discrimination' against us."

According to Rajesh Bhushan, secretary of information and public relations in the Bihar government, an increase in the government's capital outlay over the past three years has helped. "Out of the present spending, the government is spending 35 per cent for construction of buildings, roads, bridges, etc., compared to 18 per cent five financial years ago," says Bhushan. The current spending is across all sectors, from raising infrastructure to health to education. "In all of them, we required labour and the local community responded to it," he says, adding that the government's revenue has also increased from Rs 2,319 crore revenue in 2001-02 (when Jharkhand was part of the state) to Rs 5,086 crore last fiscal. "It is being spent for building infrastructure and generation of employment," says Bhushan.

The investments in health and education are aimed at reducing the factors that cause migration. According to Bhushan, the state is building 1,544 health sub-centres, and 622 primary health centres (of which 263 will be 30-bedded hospitals). Government papers also show the undergoing construction of 100-bedded hospitals at sub-divisional level, and 300-500-bedded hospitals in districts. "We have recruited 2,374 nurses and 1,757 doctors," says Bhushan.

Education has also been in focus. According to Anjani Kumar Singh, principal secretary for human resources development, the government has set up 842 residential schools in the past six months in association with NGO Pratham, which house approximately 72,000 migrant children, mostly freed from bonded labour either in Delhi or Mumbai. "15,000 more schools are being opened, and 94,000 new classrooms are being added in the existing schools," says Singh. "All these add to the development of the families in the rural areas."

These measures have come not a moment too soon for Bihar, one of the most under-developed states in the country. And while this has caused a slowdown in migration of floating labour, it has not stopped it completely. Labourers who have chosen to migrate — knowing well that less of their brethren are around this time — have taken this opportunity to up their rates. "I have seen many labourers at the railway station; no one is ready to work at the same wages as six months ago," says Ajit Lakhra, a prominent textile mill owner in Ludhiana and chief of the local knitters' association.

More mechanisation is a possible solution to the problem, says Varinder Mohan Trehan, chairman of New Delhi-based Mekaster Group. "It is important to understand that mechanisation is not against labourers, but I believe it would help the growth of the states and would help labourers to better their living standards as well." Now that is a new dimension.