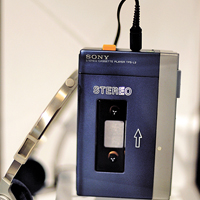 08 November, 2014
Print this article Font size -16+
Sony corporation's decision to stop production of the iconic Walkman — the cassette version — in Japan marks the end of an era. Launched in July 1979, the Walkman was the first device that allowed you to listen to music on the go. Built by a Sony engineer to cater to co-chairman Akio Morita's desire to listen to operas during his trans-Pacific flights, the Walkman, apart from unleashing a musical revolution, also played a big part in building brand Sony. The decision, though, would not have been tough for the company to make, which claims to have sold 220 million units in the past three decades. The increasing popularity of Walkman's digital successors such as MP3 players and iPod, not to forget music CD players, had already consigned it to history. But for those whose first mobile music experience was to curl up and listen to one's favourite music, even share it with a close one (remember, the device had two headphone slots!), the Walkman, with its bulky headphones, infernal tape-chewing habits, battery-hogging abilities and many other warts, will remain a fond memory.

Consumer Electronics Market Size To Grow AT 5.1% CAGR in Next 5 Years: Report