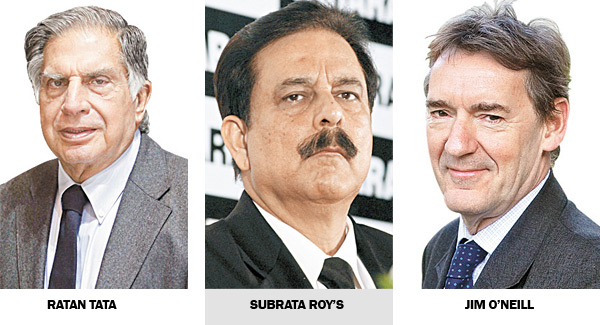 08 November, 2014
Print this article Font size -16+
Ratan Tata has ended his 33-year association with Bombay Dyeing as director. The move follows his retirement as chairman of the $100 billion-plus Tata Group in December. Meanwhile, Bombay Dyeing reported a net loss of Rs 27 crore for the quarter ended December ’12.
State of Freeze
Sahara group head Subrata Roy’s luck may have run out. Sebi has frozen bank accounts of two Sahara group firms as well that of Roy for not complying with a Supreme Court order to  refund Rs 24,000 crore raised from investors.
Mr Bric Bids Adieu
Jim O’Neill, chairman of Goldman Sachs’s asset management division, who coined the term ‘Bric’ in 2001 to refer to the four fast-growing emerging markets of Brazil, Russia, India and China, will retire later this year. O’Neill, known as Mr Bric on Wall Street, continues to be bullish on China.
The Inheritor
Manjushree Khaitan, industrialist B.K. Birla’s younger daughter, has been appointed vice-chairperson and executive director of Kesoram Industries. Birla had earlier indicated that he wanted grandson Kumar Mangalam Birla to take over  most of his companies.  However, Khaitan has been on the Kesoram board since 2001 and is probably more familiar with its operations.
A Step In Time
Prathap C. Reddy, the 80-year-old founder-chairman of Apollo Hospitals Enterprise has, in an effort to avoid feuds, formed a team to draft a will to apportion the family fortune valued at about Rs 3,850 crore.
Worm In The Apple
The mighty Apple has a challenge on its hands. And, no, it’s not from Samsung. Hedge fund manager David Einhorn’s Greenlight Capital has filed a suit seeking a bigger share of its $137 bn pile for investors.
Caught On Tape
Sanjay Chandra of  Unitech finds himself in a spot over his alleged conversations with CBI prosecutor in the 2G case, A.K. Singh. The audio tape controversy may even result in the CBI seeking cancellation of the bail granted to Chandra in the case.
Caught In A Vice
Vijay Mallya’s troubles seem to go on and on. Kingfisher’s lenders are now planning to sell its pledged assets to recoup the Rs 7,500 crore the airline owes them. Topping the sale charts are Mallya’s Kingfisher Villa in Goa and Kingfisher House in Mumbai.