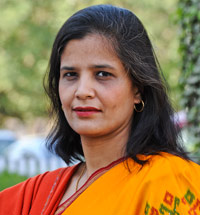 08 November, 2014
Print this article Font size -16+
A few weeks ago educational researcher and professor of Educational Technology at Newcastle University, UK, Dr Sugata Mitra won the $1 million TED grant for his 'Hole-In-The-Wall' project. It basically promotes the concept of school in the cloud (web) relying on the premise that in the absence of supervision or formal teaching students will discover good content, share, discuss and teach others too. It is based on his experiments conducted in 1999 at Kalkaji, an urban slum in New Delhi. Mitra and his colleagues dug a hole in a wall bordering the slum, installed an internet-connected PC, and left it there (with a hidden camera filming the area). What they saw was kids from the slum playing around with the computer and in the process learning how to use it and how to go online, and then teaching each other. Such is the nature of technology that children relatively unexposed to the internet and computers were able to operate and learn to work with the technology.

The outcome of the experiment points towards one direction – the need for availability of reliable and relevant content. The importance and demand of good and reliable content in education is evident in the alacrity with which SmartClasses were adopted in India. The vendors, who were keen to sell computer hardware and claim they have "content for KG till 12 Std", had a strong USP -– make the information electronically available would help their students in learning. According to a proposal letter from a Delhi-based vendor says they offer to set up SmartClasses and a Knowledge Centre and they have done so in over 10,000 schools across India. Recently there has been some information circulating that this large firm responsible for introducing smart classes is floundering since the veracity and quality of the content it offers is questionable. Schools are getting out of these alliances after 2-3 years of getting into the partnerships.

The ‘E’ Landscape
Sure, the market for e-content is growing. However, to get a definite figure for the size of the edu-content market is difficult. Perhaps these numbers and facts will help us imagine the landscape and possibilities in the ‘E’ economics. The literacy rate for the Indian population is 74.02 per cent (2011), up by 9 per cent from the previous decade. Of this 40 per cent of the population is below the age of 30, where 200 million children are under the age of 18 and 69 million of them reside in urban areas. The book market is estimated to be between Rs 10,000-12,000 crore in value with over 18,000 publishers doing business in the country.  and you will perhaps even plan on setting up shop for e-content. Moreover, the publishing industry is growing at a rate of 30 per cent as per recent Ficci estimates.

Now, let’s go over the statistics on the electronic part of the content. The O’Reilly Global eBook Market's (Feb 2013) says the ebook market in India is expected to be less than 1 per cent of the total book market, though this too is expected to grow by 20-25 per cent in the next 2-3 years.

The government of India is leading several initiatives to promote digital literacy and provide access to digital content at school and college levels. National-level missions such as the Rs 4612 crore ($859 million) National Mission on Education through ICT (NME-ICT) have been introduced. The NME-ICT is working in collaboration with other related missions and schemes—National Knowledge Network, Scheme of ICT in Schools, National Translation Mission, and the Vocational Education Mission. The idea behind the initiative, according to a report published in The Hindu (7 January 2009,http://www.hindu.com/thehindu/holnus/001200901021501.htm), is to work towards creating personalised and interactive knowledge module for students.

India’s education sector, moreover, is set to increase to Rs 602,410 crore ($109.84 billion) by FY15 due to the expected strong demand for quality education going by a recent report issued by  India Ratings, a Fitch Group Company. Indian education sector’s market size in FY12 is estimated to be Rs 341,180 crore and the market for content forms a key chunk of this pie. The sector grew at a compounded annual growth rate of 16.5 per cent during FY05-FY12. The higher education (HE) segment was at 34.04 per cent ($17.02billion) of the total size in FY10 and grew by a CAGR of 18.13 per cent during FY04-FY10.

The Fitch report also said that it has a stable outlook on the Indian education sector which includes both school and higher education. Hence it is not surprising that content service providers and publishers future strategies are based on how to capitalise this sector. For instance, in Jan 2013 it was announced that HarperCollins India would be launching a new educational division in India. Collins India in a press note said the English-language schools textbook market in India currently stood at more that £150m, more than the market size in the UK, and is expected to grow further. Similarly Wiley India launched its Authorship Development Roadshow to get quality content in Bangalore and Chennai.

Now link all this to the demand from thousands of schools for e-content in India, and perhaps you will immediately think of registering a company and learning the ropes of the business to supply content. And competition already exists in the form of the education sector (K-12, higher education and academic) who were the early adopters of e-learning and e-content have company — the trade publishers too have joined the 'E' game.

But it’s not just competition that could prove a bugbear to your prospective firm. The vendor should find out if the content he is providing to schools is legitimate and importantly if it is suitable to the recipients.

With the tablet and smartphones boom in India, convergence is inevitable. However offering good content then becomes a prerequisite. As Thomas Abraham, managing director with Gurgaon-based Hachette India says, “Where trade (non academic books, literary fiction, self help, mind, body and spirit lists) books are concerned, 90 per cent  of revenues come from the straight text flows of narrative fiction or non-fiction -- the printed page moving on to the screen.”

Content Is Still King
One of the five publishing predictions for 2013 made at international publishing conferences at the start of the year is reiteration of the fact that content will be king. This is the future of publishing. If content falters or is under-par, it will not translate into a sustainable business model. It does not matter if the service provider is a trade publisher for fiction and non-fiction books or an education publisher for creating textbooks, everyone has to focus on creating good, reliable and authentic content.

Today there are slight shifts noticed in the nomenclature being used to offer content. Well-established publishing firms whose focus is education prefer to no longer be identified as publishers instead as educational service providers. Others will prefer to use terms like “content management” and “curriculum development”. Trade publishers, whose prime focus in their children’s list is to create fiction and non-fiction, recognising the need for offering reliable and branded content in educational institutions are now expanding their lists to include grammar books, elocution speeches and quiz books written by “branded” names or those who are willing to lend names. Everyone recognises the market and its potential, so it does make strategic sense to tweak existing lists and offer it in any format: print, digital or audio. Or as was said at the ‘If Book Then’ conference, Milan (19 March 2013) “data is the new oil of xxi century”.