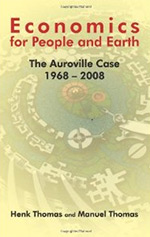 08 November, 2014
Print this article Font size -16+
Spirituality, ecology, individual creativity and social ownership are the core tenants of Auroville (city of dawn), an international township situated close to Pondicherry in South India.Ever since it was founded in 1968 on a barren patch of land, its 200-odd pioneering inhabitants (grown to 2,000 plus now), have been struggling tirelessly to fulfil their dream to create a city that “the earth needs”. In 'Economics for People and Earth – The Auroville Case 1968-2008”, authors Henk Thomas, a Netharlands-based economist, and Manuel Thomas, a chartered accountant in Chennai, reveal the results of their 15 years of research into the macro-economic activities that sustained the Auroville experiment for the last 40 years.

The book offers a window on Auroville’s economic activities through case interviews, and analyses the performance of its commercial and services domains, without turning it into a typical balance sheet analysis of the 200-odd commercial and service units that generate revenues for the township. On the contrary, the authors seem to suggest that numbers do not always tell the whole story as their analysis is multi-dimensional and incorporates the merits of thousands of acres of afforestation that has happened, the homes, healthcare centres and schools that have been built, the organic agriculture that is being practiced, the experiments in renewable energy, cost-effective building technologies and the overall impact of all these measures on the surrounding villages in terms of drinking water availability, and jobs in thousands, among others.

The book should also be read for its constructive criticism, an aspect that often gets ignored while commenting on such holistic developments by authors who, though independent, have a deep admiration and love towards the topic they handle. Thus, it notes that despite impressive results in the field of ecology, overall productivity has been insufficient to sustain the rapid expansion of Auroville. The authors highlight the growing integration and the increasing dependence of the Auroville community with the outside economy and point out that the operations of institutions like the Auroville Board of Commerce fall short of the challenges that need to be met in a modern economy.

The authors have also rightly resisted the temptation to compare Auroville economy with similar movements in Spain (Mondragon Cooperative System) or Israel (Kibbutz) as, though they are all collectives and community living in the broad sense, the inclusiveness in the Auroville experiment, and its search for authentic local development alternatives, have its uniqueness.
Tags assigned to this article:
economy books book review web exclusives bwbooks 7 natural resources joe c mathew non fiction township economics for people and earth auroville auroville social research centre henk thomas manuel thomas ecology