The Debt Burden Gets Heavier 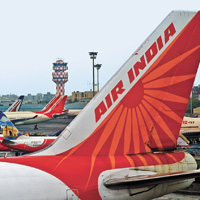 08 November, 2014
Print this article Font size -16+
Firing of recently appointed officials (the Pawan Arora fiasco), independent board members unhappy with the state of affairs, trouble at T3 (Terminal 3), finances wearing so thin that even paying salaries could be difficult beyond March 2011... the list of troubles goes on and on for debt-laden Air India.

And here is a fresh one. According to senior government sources, the State Bank of India, IDBI and Bank of India (the airline has taken loans from most nationalised banks) backed by the Reserve Bank of India are unwilling to recast the airline's debt (unlike for Jet Airways and Kingfisher Airlines where the recast is under works) unless the shareholder — in this case the government — hikes its equity in the carrier to at least Rs 5,000 crore from Rs 945-odd crore currently. If the last equity infusion of Rs 1,200 crore cleared by the Cabinet comes in as promised, the government holding in the company would rise to nearly Rs 2,500 crore — the government will have to infuse Rs 2,500 crore more to reach the Rs 5,000 crore level.

Air India's debt stands at around Rs 40,000 crore. "In such a case, only government intervention can make a difference," says an official.

The group of ministers (GoM), which will meet on 6 December, will be informed that the airline has reached "the end of the road" and that it cannot survive unless its debt is recast. A debt recast will help the carrier reduce the interest rate on its working capital loans. Air India's current net worth is in the range of minus Rs 15,000-17,000 crore. "That's what it is worth if you decide to sell it today," says a consultant who has worked closely with the airline. He says every rupee that the airline is spending today is borrowed money.

What makes matters worse is the fact that most of the airline's senior management is busy with internal politics. Many within argue that the hiring of chief operating officer Gustav Bauldoff at an exorbitant pay packet can make very little material difference to an airline that is sinking fast.

Analysts are also questioning the debt recast, which aviation minister Praful Patel had justified at the time of announcement, saying it would benefit Air India and not just Jet Airways and Kingfisher Airlines. "However, the opposite seems to be happening. The private airlines that use their political influence to their advantage are going to benefit. And Praful Patel is simply not interested," an official points out.  The minister's apparent disinterest in rescuing the airline is irking many who argue that when it came to certain decisions such as fleet induction or handing out a contract for a new passenger service system, he was very hands on, but now when the crisis has come to a head, he is maintaining a distance.

"This is no different from the bailout package — shift from licence-fee regime to revenue share, which resulted in notional revenue loss of close to Rs 80,000 crore for the government — that was given to the telecom companies, which is now coming under scrutiny. It is like delaying a time bomb. The postponement of repayment will help the airlines survive but has anyone looked at these airlines' ability to repay? This could well end up as bad debts for the banks over a longer term period," says a senior civil aviation ministry official on condition of anonymity. The question he is asking is that would such a package have been cleared had the beneficiaries been the lesser known and less influential airlines or the low-frill carriers such as SpiceJet or Go Air?

The unpopular chairman and MD Arvind Jadhav, however, continues his grim and silent fire-fighting on a daily basis. For Air India, the fog is certainly getting thicker.