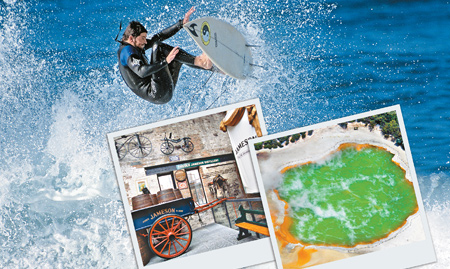 
Ireland: Perched on the northwest tip of Europe, Ireland has hundreds of cultural, natural and historical attractions from Bunratty Castle to The Burren in Clare, The Guinness Storehouse and Kilmainham Jail in Dublin to The Skelligs and The Lakes of Killarney in Kerry. It is rightly said — this is the one place in the world where even getting lost is worthwhile. While there are no major temperature differences between the seasons and rains are likely every second day, best time to visit the place is from April-October. Cox & Kings suggests a visit to St Patrick's Cathedral, stop at the Old Jameson Distillery followed by whiskey tasting in the Ball o' Malt Bar. Also visit the Guinness Storehouse, part of the world-renowned brewery, and uncover the history of the famous beer. Finish off your tour with a delicious pint in the rooftop Gravity Bar. And yes, don't forget to take in the forests and glens, and hike up the mountains to uncover and discover ancient myths and sites.

Cold
Argentina: Crackling of breaking ice and immense sheets of ice walls plunging into the waters can blow away heat blues in a jiffy. And to visit these glacier territories you need not fly to Greenland or Antarctica, all you have to do is plan a trip to the Glacier National Park in Patagonia. The region of Patagonia and the area of El Calafate are extremely rugged and as a result support many activities such as hiking, biking and horseback riding. If you are a marine wildlife lover then Peninsula Valdes region will interest you. You can admire the colony of magellanic penguins, elephant seals, killer whales (orcas), and other marine species. Also discover one of the smallest and most beautiful dolphins — the Commerson's Dolphin — only found in the Argentinean Patagonian coast and in the Kerguelen Island in the Indian Ocean. June is the beginning of the winter season in Argentina, and the perfect time to visit.

break-page-break
Norway: This is one place where the sun never sets in the summer. North Norway is home to both the midnight sun (constant daylight from April to July) and the northern lights (best seen in October, February and March). It is a rugged land of steep mountains, deep fjords and scenic coastline, making it a great place for outdoor adventures like dog sledding, snowmobiling and wildlife safaris. Norway has a range of tourist attractions from Lofoten Island — also known as lover's paradise — to Tromso to Bergen or Storsteinen. Head to East Norway for  places like Jotunheimen, which offers good conditions for skiing both on and off prepared tracks. If that's easy for you, then explore the rough, off-track terrain of the Strynefjellet mountains. Jotunheimen also offers activities such as ice cannoning, ice climbing, snowshoe walking and breathtaking walks under the night sky. Another must-visit place is Innerdalen, the country's most beautiful mountain valley; the lure is heightened by the fact that no road leads up to it, you can only reach there after a two-hour walk.

Peru: This one is strictly for the fit. Trekking is the major attraction and the Inca Trail, an ancient route more than 2,000 metres high in the Andes mountains above the Urubamba river that the legendary Inca red Indians are believed to have taken to reach the city of Machu Picchu, is the highlight. With routes that take two or four days, and given the high altitude, the trek can get strenuous. The result, though, is worth the effort, with the ancient ruins of the Incas bewitching you, and over 400 species of birds that inhabit Machu Picchu enchanting you. After a day long trek at the ruins, you can relax at the nearby hot springs. May to November is the best time to go.

Coldest
Now, here's the fun part. You can escape the heat and experience ice-cold temperatures even in India. Drop in at one of the many ice bars  across the country, where you can sit on an ice chair in a room made of ice decorated with ice sculptures. Have a vodka or tequila shot in an ice glass amid minus 8-10 degrees temperature. If the idea excites you, head to Delhi's Ice Lounge in Saket or Rajouri Garden's Freeze Lounge or Mumbai's 21 Fahrenheit. Drinking and dancing at such low temperatures can be exhilarating, but don't expect to survive there for more than 30 minutes as the furry coat and gloves are not protective enough. And when the chill in the air starts to hit your ears, nose or feet, the hip hop music or the ice sculptures seem to lose their charm. However, if you have visited ice bars in London, Milan or Tokyo, lower your expectations before you step inside.

While ice bars help experience sub-zero in India's blazing heat, there's no substitute for the real thing. So stop pottering, and plan your vacation before you miss the summer rush.