The Change Of Guard At Wipro 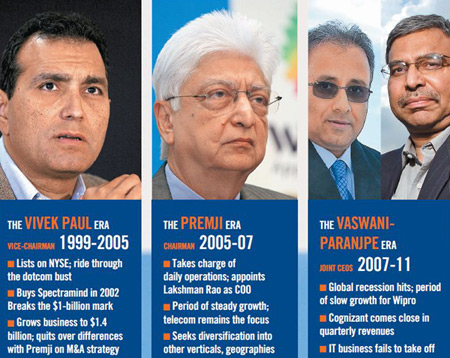 On his part, though, Premji himself is believed to set high standards of financial management, integrity and professionalism. He travels economy on domestic flights. His elder son Rishad had to send his CV to Wipro through the HR route, and had to sell his shares of Wipro to pay back the loan from his father. "He sets high standards and you are expected to follow them. We don't fly business class on domestic flights — some things we learnt when we became part of Wipro," says Quatrro's Roy. For his philanthropic activities, Premji opted for a clean deal to transfer shares worth $2 billion to the Azim Premji Foundation rather than keeping them in a separate company.

How well Premji's conservatism gels with Kurien's firepower will really be the big test for Wipro's growth. But there is a lot more than their reputations at stake here. In the high-growth world of IT offshoring, mis-steps can be suicidal as Soota (co-founder and former executive chairman of MindTree) or Narendra Patni of Patni Computers would testify. Wrong moves make the difference between promise and performance. Or, greatness and mediocrity.

Roy, for one, is one of those who is not shaken yet. "I have not sold my stock. I do not intend to. I believe in what that company does, but believing is not always agreeing with it. Still, nobody has a bigger stake in the firm than Premji. I am sure what he does is right," he says.

With inputs from Sunny Sen and Hari Pulakkat