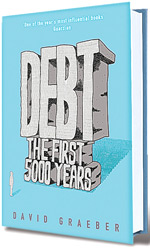 08 November, 2014
Print this article Font size -16+
Discussing debt has become a favourite with authors post the sovereign debt crises that made writings on such topics good business. But rarely do we get to read an anthropologist’s take on debt and that is why David Graeber makes a mark with this extremely interesting book. Graeber explains the evolution of debt through various societies and the way it is perceived today. While typically one’s sympathies lie with the creditor, he prompts us to look at it from the debtor’s point of view. At times, when he raises a moralistic issue where he justifies the non-repayment of debt if the money is spent on the poor, Graeber provokes debate.

His views on debtors are quite novel. First, he says, countries were colonised and made to pay for developments they did not ask for. Can such debt be justified? Second, indebtedness also increased during wars and the loser became indebted when it was made to pay for reparations. Last, after the Opec crisis in the 1970s, oil producers earned truckloads of dollars which were lent to dictator countries at high interest rates, which were then embezzled. Later, elected governments were left with the overhang, which could not be repaid. How do we judge these situations?

Graeber is fairly caustic on the US, which urges third world countries to open up markets while running the world’s highest levels of debt. He does not miss a chance to chastise entities such as the IMF, which bully borrowers into following their western-oriented policies — a view echoed often by Joseph Stiglitz.
The author goes back in time to tell the story of how the concept of debt evolved. He delves into religions, which are invariably ambivalent when it comes to viewing debt. Debt is transformed into a sense of guilt that leads to self loathing. While religions are not against markets in general, they object to debt on commercial grounds. To tell the story of debt, one needs to know the language of the market place.

Graeber distinguishes between debt as a concept in a human and commercial economy. It varies across cultures. In Madagascar, an exchange is a way of cancelling debt, which ends a relationship between two individuals. In Nigeria, people lend neighbours stuff that has to be repaid in kind or cash at a later time. Societies expect a balancing of the equation. So, all transactions are viewed as a way of settling a debt. Taking this anthropological study further, Graeber goes into ancient Irish society where slavery came into being on similar grounds and slaves became a currency. Bonded labour was an outcome of a loan being settled through generations. This is also not uncommon in India. In ancient societies, the same was extended to prostitution, which was a way of repaying debt.

The commercial or money economy then changed the landscape of debt. From around 1825 onwards to 1971, the age of capitalism commenced with the dictates of Adam Smith catching on. An extended form was military intervention of the US in Vietnam, which led to an increase in its own debt. And that is ironically being financed now by emerging countries. Even today, it creates armies across the globe, whose maintenance is being financed by the rest of the world. So there is a contradiction between political imperative of establishing capitalism and its own need to limit its horizon.

Click to read an interview with author David Graeber

The concept of debt as it has evolved has encompassed various emotions across ages — sin, guilt and redemption. What Graeber does is to expose the manner in which debt has been created and these relations exploited for the betterment of certain sections of society, while others, such as the US, get away easily. He shows this is not anything new but has been in existence for long, and even argued by religions. This is a refreshing and compelling treatise on debt written by someone who calls himself an anarchist.