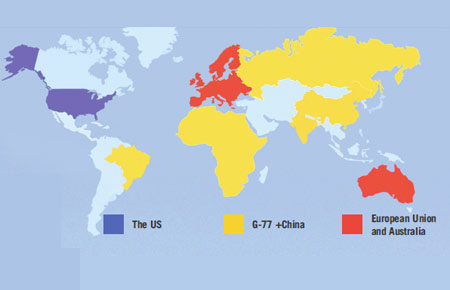 Rejected (and has singlehandedly sunk) the Kyoto Protocol. Wants India and China also to commit to emission cuts. Will have an emission cap-and-trade# regime. Plans to impose trade barriers against countries without a cap-and-trade system. Willing to cut emission by only 17 per cent by 2020 from 2005 level.

Commits to roll back emissions to 1990 level by cutting the projected 2020 emission by 36 per cent. Breaks rank with G-77 by committing a target to put pressure on the US.

Maintains the Kyoto Protocol principle of common but differentiated responsibility. Will undertake unilateral climate change mitigation steps but will not make legally binding commitments. Will open only externallyfunded mitigation projects to international verification and scrutiny.

Like India, backs Kyoto Protocol principle of the historic polluters' responsibility to cut emissions. Plans to reduce emission intensity of its GDP growth by 45-50 per cent through unilateral and externally-funded measures.

Wants a minimum compensation of $100 billion a year from the developed countries. Insists the rich countries cut emissions by 40 per cent by 2020. Opposed to any new deal replacing the Kyoto Protocol that may water down developed countries' commitment to take deep emission cuts and to finance poor countries' efforts for climate change adaptation and mitigation.

Has proposed an alternative to Kyoto Protocol asking developing countries to commit policies and actions for mitigation. Favours a cap-and-trade regime.

Pushing hard for an agreement at Copenhagen; favours a cap-and trade regime, but supports Kyoto Protocol. Will raise its emission cuts to 30 per cent from already offered 20 per cent, if the US in particular, also commits a similar cut. Says poorer nations will need €100 billion a year by 2020 to tackle global warming; but how much the EU will fork out depends on Copenhagen results.

#A scheme to impose limits on emission and allowing trade in excess emission savings.