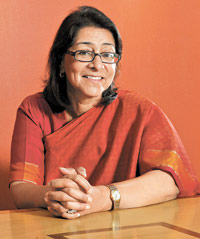 08 November, 2014
Print this article Font size -16+
At its most basic, the banking challenge facing successive governments has not changed in years: how are we to deliver more efficient financial  services to a broader spectrum of the population? How can we bring down the cost of capital for industry?

The book I had edited, Contemporary Banking in India (published by BW Books), tackles many of these issues.

The answer, in the past, has always been to use regulation to force banks into priority sectors, but as a policy it has failed, hobbling the banks, stifling innovation, and delivering mediocre and unsustainable products to the people who need access to financial services the most.

We must shift from activist regulation, which tells banks how to do their job, to passive regulation that sets limits to protect consumers, but otherwise allows each financial institution to concentrate on fields where they have a competitive advantage. By being efficient users of capital, the lending rates of banks can come down. Yet, most banks seem to be struggling, being all things to all people, competing in every product category possible, while trying to fulfil their social obligations as corporate citizens.

Banks are supposed to be enablers: they provide the lubricant that makes commerce flow, and act as catalysts to convert the savings of ordinary Indians into the capital that powers economic growth.

However, our public sector banks (PSB) are hobbled by rising NPAs, while swallowing ever larger chunks of the budget. The UPA government allocated Rs 11,200 crore to PSBs in its interim budget. The RBI estimates that it will take some Rs 5 lakh crore to recapitalise PSBs and prepare them for the more rigorous requirements of Basel III, and the haemorrhage of cash is unlikely to stop there. NPAs are a concern. We need mechanisms to work out bad loans, enabling oxygen to critically ill companies that could recover. We need more asset reconstruction companies. We need to expedite clearances of stalled but viable projects  while  dealing effectively with wilful defaulters.

The debate about privatisation of PSBs is fascinating, but premature. In the long term, privatisation will deliver greater efficiency as its proponents say but, in the short term, there are plenty of fast fixes that can deliver greater efficiency without necessarily taking them out of public ownership. They should be allowed to raise capital as and when needed, as indeed our private sector banks have very successfully demonstrated through equity raisings. If this leads to dilution of the government’s holding, so be it, as this is better than using taxpayer’s money and impacting the fiscal deficit. Some of the other fixes are:
There is no doubt that banks have a key role in promoting financial inclusion and reaching out to the rural, underbanked and underserved. However, regulatory coercion is significantly less efficient than allowing the financial system as a whole to find ways of doing it. Forcing banks, though they may not be equipped to provide this service, and extending them when it might not be financially viable to do so, is counterproductive. There is a case here for differentiated models of banks that can specialise in servicing this population while remaining profitable. Differentiated bank licences as mooted by the RBI governor may well be the way forward .

The Indian IT sector, after it was liberalised, carved out a strong niche for itself, especially in software services. This sector has also lowered technology costs for Indian banks and greatly levelled the playing field. We need to mine this technological expertise more effectively. All innovation is potentially problematic, but with intelligent regulation that protects customers and prevents systemic risks, it should be embraced. Mobile banking, for example, presents one such opportunity to reach out to the remotest without necessarily investing huge amounts in physical infrastructure or staff.

We need larger banks. Our largest business groups are hitting the ceiling of borrowing set by RBI for banks for prudential reasons. We need more banks — some specialised in key areas where there are identified gaps.

All the above just needs a demonstration of intent on the part of the government. Narendra Modi needs to create an enabling environment. We have a strong, capable and proven regulator who can then define the boundaries that must not be crossed. Let the rest of the canvas be blank so that Indian banks may find their own way to success.