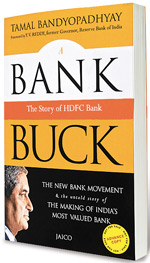 08 November, 2014
Print this article Font size -16+
Writing the biography of an institution is a challenge. If it is to record its history, the objective is clear and the path is one of documentation. But if it is to tell the story of a dynamic organisation that epitomises innovation, the narrative sets paradigms. Else, the story runs the risk of having a limited audience, being familiar to those associated with the organisation, and the names may not mean much for the lay reader. So, reconstructing the growth of HDFC Bank — arguably the steadiest bank here — is prima facie an unexciting story. It does take one of the most accomplished banking journalists to add the necessary zing to the story.

Tamal Bandyopadhyay starts by talking about the ‘dirty dozen’ that set up the Bank, cherry picked by Deepak Parekh — who for all purposes — has been the ‘producer’ of this potboiler. Parekh, who carved the HDFC Bank story out, is technically an outsider, but he has steered right from its start through the entire mergers and takeovers to where it is today. Aditya Puri, managing director and CEO of HDFC Bank since its inception, is more of the ‘director’ of this saga.

Arguably the cleanest private bank in India by far, HDFC Bank has seldom strayed from the path except for a brief deviation on the forex derivative tryst, where the penalty was just Rs 15 lakh. It was more of a reputation hit. There was also the Roopalben Panchal case where it was caught on the wrong foot, but recovered as fast as it slipped. The bank was created by foreign bankers who had to deal with several tradeoffs in terms of pay cuts, risk and giving up good positions on foreign lands. The idea was to provide services of a foreign bank and create relationships and distribution channels of nationalised banks — the best of both worlds.

Getting the team in place was the hard work of Parekh, but getting in like-minded people made the concept work. Their initial days before the main office came up make interesting reading, but this is the joy or travail of creating organisations. HDFC Bank, unlike its closest competitor ICICI Bank, was not an innovator or risk taker, but an astute follower that blended commerce with prudence to be known as the bank with the best quality of assets. Minimising risks and running a diversified book allowed it to “eat well, sleep well”. The focus was always on net interest margins and enlarging the Casa (current and savings account) component in deposits.

Bandyopadhyay vividly narrates how the bank acquired customers. It started with Siemens and went about systematically from being a corporate-to-retail bank to enlarge its perimeter. The small and medium enterprises came much later. The bank also had its brushes with bad assets, including microfinance firms, but it was manageable given the low exposure. More importantly, it was swift to make an exit.

HDFC Bank will also be remembered as the only bank to be involved in a series of mergers, starting with Times Bank and then Centurion Bank. The process of physical and cultural integration was a challenge well accomplished given that Times Bank followed public sector giant SBI while HDFC Bank had a foreign bank tilt.

Bandyopadhyay says the bank is ‘doing ordinary things, the extraordinary way’. The same can be said of his narrative as well; he keeps the reader engaged. While he gets Puri’s colleagues to talk about him, the tilt is definitely positive. It would have been interesting to hear from detractors, which is important especially when the leader has been so successful. On a lighter side, it would have been interesting if the author had either discussed with Parekh or provided his own view on having the same MD & CEO since the bank’s inception and how it fits with the concept of corporate governance that has been epitomised by the bank. Also, Bandyopadhyay does not ‘choose’ as to who should be credited for HDFC Bank’s success: Parekh or Puri — as a journalist, he could toss the coin.