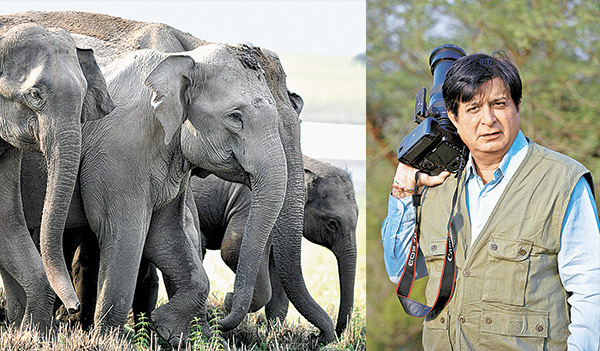 08 November, 2014
Print this article Font size -16+
You could call it the thrill of the hunt. The adrenaline rush of stalking wildlife in its own habitat is hard to match. A 100 years ago, the Indian maharaja’s weapons of choice while going out for a shoot were custom-built Westley Richards, Holland & Holland or Rigby rifles and shotguns. Today’s corporate maharajas no longer use guns for their shooting. The weapons they wield now are high-end Nikon and Canon DSLR cameras, equipped with the finest lenses money can buy.

Businessworld caught up with two such current-generation ‘hunters’ to learn more about their passion.
Burning Bright
Navin Raheja, CMD of Raheja Developers, is a a self-confessed wildlife enthusiast and photographer. How did he begin? Was it love at first sight? “It was more like the scare of my life,” says Raheja, ­describing his first encounter with a tiger in the wild, at Corbett National Park over three decades ago. “We did not even get to see it, the roar was enough to make us motionless,” he says.
But it was enough to create a connection. “I never forgot the roar. I wanted to come face to face with a creature that majestic. So I visited the park again and again. When I finally saw it, it was love at first sight.” Over the past few decades, Raheja has made more than 500 trips to various national parks across the country in search of the elusive tiger. “They aren’t elusive anymore. I know how to find them. They can sense that I’m a friend,” says Raheja.
Around the time that his love affair with the big cat started, Raheja also found himself another passion — ­photography. “I bought a Pentax, 120 format, from a foreigner in the late 1970s and started experimenting with photography.” It wasn’t long before his two loves got introduced to each other. “Wildlife photography seemed like the obvious way to go.”
While Raheja ­enjoys clicking all sorts of animals, he admits there is something magical about clicking the tiger. “I never get tired of clicking the ­tiger even though I have clicked several hundred pictures till date. The expression, the beauty and the sheer majesty of the creature makes it the perfect model.”
Though Corbett continues to be his favourite shooting ground, he has been to ­several other parks such as Ranthambore, Rajaji, Bandhavgarh, Kanha and Dudhwa.
Are all these parks different? “Yes. The topography plays a key role as does the character of the tigers,” explains Raheja. “You need to surprise the tigers in Corbett, while in Ranthambore, you can follow them and shoot. In Bandhavgarh, there are designated places where a tiger nearly always makes an appearance and you can shoot it.”
And that is why shooting in Corbett becomes the most difficult of them all. Raheja says he needs a very silent vehicle when shooting in Corbett; he uses his Forester which he has remodelled with a vast sun roof. “Wherever regulations permit, I prefer to even drive on my own and not have anyone else in the vehicle as other people tend to shake the vehicle,” says Raheja who is a member of Project Tiger, a government initiative to safeguard tigers in India.
Raheja now uses a Canon D7, Canon D5 Mark II, Nikon D200 and Nikon D800, among others. He uses a 2.8, 7800 mm lens and a 3.5-4.5, 7500 mm lens. “The 7500 is a slow lens, good for shooting in the day time when there is enough light.”
He admits that improvements in the quality of cameras and the lenses over the years have helped wildlife photography. He adds that autofocus is a real boon for amateur photographers. “Animals do not give you time. They do not pose for you. They give you a fraction of a second to shoot.

Autofocus, and the fact that you can shoot several frames per second, really helps.”
So, what according to him makes for a good wildlife photographer? “Anticipation is vital in wildlife photography. You have to be familiar with the behaviour of the animal and keep the appropriate equipment ready. Anticipation takes you to the place where the­re is a probability. Getting a good shot is your luck.”
To Catch A Flying Bird
For G.V. Prasad, chairman and CEO of pharma major Dr Reddy’s Laboratories, bird watching and subsequently bird photography happened by chance. Nearly 10 years ago, Prasad was introduced to bird watching by a friend who is an ornithologist. “Birds are everywhere, but I wasn’t consciously watching them. Now that I do, I’m fascinated,” says Prasad who watches them not only at several parks in ­Hyderabad, including at the Icrisat (International Crop Research Institute for the Semi Arid Tropics) campus, but also at home. “I’m fortunate to stay in a very green area of Hyderabad where loads of birds can be spotted.”
But how did he get into photography?“It was a natural progression. You start by observing the birds and other wildlife and then you start clicking them.” Prasad believes in learning by doing. “I’m not the kind to read manuals to learn photography. You just keep clicking till you get the right shot. You learn on the fly,” says Prasad while confessing that it took several bad shots to finally get that one good picture. “Here and there a friend would make a suggestion, sometimes a photography guide or a fellow photographer would give advice on speed, red eye correction, etc. You incorporate these but finally you get the hang of all the settings only by clicking, and clicking a lot.”
At least once every two months, Prasad goes on a bird-watching trip. He is a member of the Bird Watching Society of Andhra Pradesh, but accompanies the team only 2-3 times a year. “Owing to time constraints, I can’t travel with them frequen­tly. But I try to make individual trips with a friend who is also a bird watcher.”
Prasad’s last trip was to Botswana in August 2012. “It’s a paradise for both wildlife watchers and photographers. There’s just so much wildlife there that you cannot but help take good pictures.”
Prasad acknowledges that a good photograph is not only about skill but also luck. “Some of the best shots are a combination of patience and luck. You have to be at the right place at the right time.”
Of course, the right equipment is important, too. Prasad himself uses a Canon 5D Mark III. He has a 2.8, 300 mm prime lens and uses a 2x extender. “You need to have a decent camera with a big lens as birds are generally small and very far away. They tend to disappear when you go closer.” Also, a lens with a big aperture is always useful. In order to capture a bird in flight you need a fast camera that supports really high shutter speeds.
While early morning is one of the best times for bird watching, the light is poor and so it’s difficult to get good shots then. For photography, 8-8.30 in the morning, when the light is good, is a much better time. “Patience is truly a virtue when it comes to wildlife photography. You can spend your entire day waiting in a park and just when you decide to leave you may spot a rare bird or a shy animal.”
Prasad’s advice to other amateur wildlife photographers is to be patient and not be intimidated by the camera. “Often, when you spot a bird, you don’t have enough time to change the settings of your camera. You click, you learn, and you are better prepared the next time.”