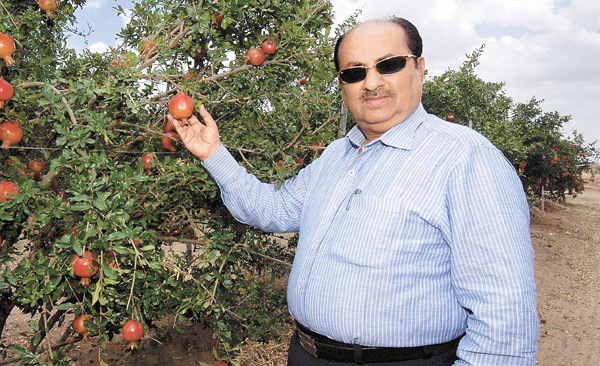 India produces nearly 11 per cent of the world’s vegetables and 15 per cent of all fruits. The country is the largest producer of mangoes, bananas and pomegranates, globally, though its share in the international trade of fruits and vegetables remains a meagre 1 per cent. A plethora of government schemes such as the National Horticulture Mission and the Rashtriya Krishi Vikas Yojana, the efforts of the agriculture export promotion body APEDA and the National Horticulture Board, and agriculture extension programmes of various state governments, have not been able to arrest the declining growth in agriculture exports.

The problem with our farming, experts say, is elementary. Indian farmers are mostly small and marginal with fragmented landholdings. And the small size is making adoption of farm mechanisation and modern techniques difficult. Until pooling of landholdings becomes easy, achieving economies of scale will remain difficult, points out the Economic Survey 2011-12.
It is in this context that the growth of a new generation of agri-entrepreneurs, which believes in global best practices, turns interesting.  These entrepreneurs offer farm-to-fork services which global retail giants like Carrefour vouch for, and are fast becoming the preferred picks of venture capital funds interested in agri-businesses. The fact that they all find a common clientele in retail chains is an indication of the early bird advantage that awaits them as and when India allows foreign direct investment (FDI) in multi-brand retail.

Enter The Experts
The credit for building the DFV brand, perhaps, needs to be shared with its CEO, a computer science graduate from IIT Kanpur, Pankaj Khandelwal, under whose guidance DFV grew 80-fold in valuation in two years. He moved out of DFV after the two-year contract his company — Insight and Intellect (InI) Consulting — had with DFV ended, but that was only the beginning of the agri ambitions of this 38-year-old technocrat, who also possess a management diploma from IIM, Calcutta. “I was fascinated by the opportunity in farming. We (Khandelwal and his angel investor friends) bought 40 acre in Ahmednagar (near Mumbai) in September 2009,” says Khandelwal sitting in his corporate office in Mumbai. InI wants to specialise in pomegranate farming.
“It is a combination of three systems — contract farming, management of land assets of people whom we consider investors and trading,” he says. What InI does in the second instance is to have management agreements with landowners. The entire farming will be InI’s responsibility, expenses and profits (or losses) will be shared. Khandelwal says there is lot of interest among the “asset class” to go for such management contracts. In the past three years, the company has got 500 acre under its management control. It exported 300 tonne last year, and expects to touch 1,000 tonne this year.
InI has farm managers, supervisors and technical experts to manage farms. It has also introduced automated (drip irrigation) systems. “We spend Rs 3.5 lakh per acre in automation. Such practices are beyond the means of a common farmer,” Khandelwal claims.
In December 2010, his project got financial support from equity investment firm Aavishkaar. In July 2012, Unilazer Ventures picked up close to 45 per cent stake in InI. “We will manage 2,000 acre of pomegranate farms in the next 18 months. We aim to raise the average productivity of pomegranates from 4.5 tonne per acre in India today to the global level of 15 tonne per acre,” he says.
joe (dot)mathew(at)abp (dot)in
(This story was published in Businessworld Issue Dated 27-08-2012)
Tags assigned to this article:
magazine retail agriculture exports fdi profiles horticulture enterprise joe c mathew deepak fertilisers magazine 27 august 2012 agri millionaires prakash khakhar hv rao mr chandra mouli ranjan kedia pankaj khandelwal