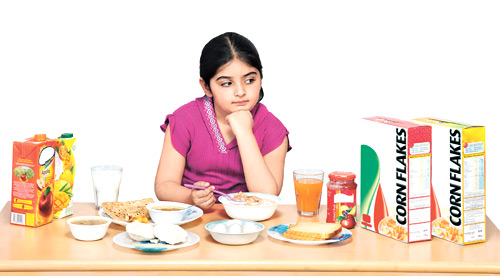 To tap health-conscious urban consumers, packaged breakfast producers give a lot of importance to the nutrient value of their products. For instance, New-Delhi based Bagrry's India added bran to its wheat flakes and put it back on the table (it had pulled out of cornflakes in the late 1990s). Bran, the outer portion of wheat, has antioxidants, vitamin B and fibre. The inside germ is the embryo which contains  vitamin B, some protein, minerals and healthy fats. Without the bran and germ, about 25 per cent of a grain's protein is lost along with at least 17 key nutrients. "When you process corn for cornflakes, the tip gets removed and the bran comes out so what is left is only the carbohydrates. So, the fibre content of cornflakes is negligible," explains Divya Jain, vice president (international trade) at Bagrry's India. The company, which manufactures maida and flour for Nestle, ITC and Domino's, started its in-house packaged breakfast brand Bagrry's in 1995. Today the company offers 45 stock keeping units (SKUs) across four categories — oats, muesli, wheat-flakes and cornflakes. The Shyam Bagri-led company imports oats from Europe and Australia at a duty of almost 37 per cent. "We are  undergoing a    re-branding exercise and are in the process of rolling out an ethnic breakfast portfolio in the next six months," says Bagri, chairman and managing director. With a presence across 40,000 retail outlets in north and south India, it had a turnover of Rs 45 crore last fiscal and aims to touch Rs 50 crore in 2012.

Scurrying For A Pie
Ponnu Subramanian, vice president of foods division, Spar Hypermarket, feels that past few years have witnessed a dramatic shift in the eating habits of young urban consumers. "Over the last three years, the range of offerings (breakfast) has gone up dramatically, both local and imported. The westernised form of breakfast cereals, muesli and oats have seen a growth of 15-20 per cent year-on-year while the ethnic food category has seen limited or flat growth," says Subramanian.

break-page-break
Larger players like Pepsico have also invested heavily with a long-term vision. Globally, its Quaker brand churns out close to 40 SKUs and it ranges from oats, granola bars, cereals, pancake mix to cookies.  Quaker made an entry in 2006 in the southern market where branded oats were non-existent.

Today, Quaker compliments itself for having built the category, but is now busy warding off a market share war which can trigger after the entry of GSK, Britannia and Marico's Saffola (in the past eight months these too have jumped into the oats market). Quaker is the fastest growing product in Pepsico's portfolio, but Vani Gupta, vice president, marketing, Quaker, PepsiCo India, is quick to admit that category creation is no easy task.

"Ad-spends have been disproportionate to growth. Since we are trying to educate the consumer, there is bound to be an extensive drive to induce awareness," says Gupta. "We are seeing market share chipping but we will protect our core consumer base since we are here for a long-term market creation," adds Gupta. In the middle of last year, Marico's Saffola brand also joined the oats market with the launch of Saffola Oats. Currently, the brand has about 10 per cent market share in oats category and is now one of the top three players.

According to a report by Motilal Oswal,    Horlicks Oats received a good response in the markets of Tamil Nadu and Kerala. The product is No. 2 and No. 3 in market share in the two states, respectively.  At present, the frequency of consumption for oats remains quite low, and brand managers anticipate the consumption to be close to one box every one-two months.

Another entrant in the slightly premium muesli market is Dr. Oetker Fun Foods which launched Vitalis in the middle of last year. It imports muesli from Germany, but plans to set up a manufacturing plant in Bhiwadi (Rajasthan) by 2013. "We spent Rs 50 lakh on advertisements on out-of-home (OOH) in Delhi alone. Now we plan to reach out to 10 more cities," says  Olivier Mirza, managing director of Dr. Oetker India and Fun Foods, which did about Rs 5 crore worth of business in muesli last year.

Tropicana has re-positioned its brand as a breakfast adjunct through it latest ad-campaign. "Internationally, juice and breakfast is a slam-dunk, but in India, culturally that is not true. We did a lot of study around consumers' attitude and realised that there was a gap in the mornings for adult consumption vis-a-vis beverages, as the beverage habit tends to drop among adults. A few people take tea while others do not, so there  lies the first opportunity," says Homi Battiwala, executive vice president, colas, hydration & mango-based beverages.

Last year, Tropicana rolled out modern trade activation. "We picked each of the top modern trade outlets in India — Reliance, Spar and More — and did a lot of breakfast bundling: combo of Quaker plus Tropicana, Tropicana plus eggs, Tropicana plus bread by placing juice right next to fruit and veggies. We tried to cement an opportunity to create a habit without trying to prove that we are a breakfast product but that the role is enhanced at breakfast," adds Battiwala.

Importing The Morning  Meal
While domestic companies have jumped into the breakfast market, some like General Mills and Nestle have stayed away. The world's No.  2 breakfast cereals producer, Cereal Partners Worldwide (CPW), a joint-venture between General Mills and Nestle since 1990, is currently not present in the Indian breakfast cereal market. The company is driving sales in over 130 countries. Says a company's spokesperson, "India is one of the emerging markets that CPW is reviewing annually as part of the company's long-term strategy to extend its business globally." CPW has a strong portfolio of over 50 brands, including Fitness, Cheerios and Nesquick. General Mills is present only through Nature-Valley granola bars in India, despite a weighty breakfast cereal portfolio globally.

Imported cereal brands remain quite a hit with the urban population. Max Foods, started by Amit Lohani in 1997, brings an array of imported foods to India such as Post cereals and Weetabix. Post, earlier owned by Kraft Foods, is a dominant player in the US competing with Kellogg's. In India, it is the No. 1 brand in the imported cereals category. "When we entered, the cereal market was small and restricted to upper middle-class India. But over the last five years, there has been a lot of shift in the consumer habits," says Lohani, managing director, Max Foods India.

Lohani expects a 100 per cent growth for Post Cereals compared to the overall growth of imported foods at 30 per cent. There is a 30 per cent custom duty with another 20 per cent by way of VAT, and this pushes the price by 40-45 per cent. According to industry insiders, the company plans to make a local entry in 2015.

The food and service chains have also forayed into the breakfast market. Walk into a McDonald's in the morning and you can smell eggs and hot coffee. The fast-food chain has plans to serve breakfast at 70-80 per cent of its outlets soon. "Our initial research showed that 98 per cent have breakfast at home, while 9 per cent did so at home and outside," says Vikram Bakshi, managing director, McDonald's India (north and east). "We have introduced a breakfast menu at airports and in railways and this has helped in spreading our breakfast menu to customers in tier-1 and tier-3 cities." The contribution of breakfast to overall sales in mature markets across the world is a significant percentage, but "in India, it contributes around 5-6 per cent", he adds. Barista started to serve breakfast about three years ago and now covers 15 Barista Creme outlets. "Depending on the catchment area, we will start serving breakfast," says Nilanjan Bhattacharya, COO, Barista Lavazza. A few months ago, chicken behemoth KFC also launched its breakfast menu to make its presence felt in the early morning race.

There are enough hungry mouths at the start of the day; the trick is to find a place at the table.

No Hotels, Restaurants Can Add Service Charge Automatically Or By Default In Food Bill: Govt