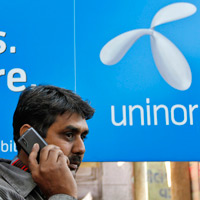 08 November, 2014
Print this article Font size -16+
Norway's Telenor is in talks to merge its Indian operations with Tata Teleservices to gain a bigger foothold in the world's second-biggest mobile phone market, a source with direct knowledge of the situation said on 27 November.

Telenor, which won rights to operate in six Indian zones in an auction this month after its earlier permits were ordered to be revoked, is looking to take a majority stake in the merged entity, the source said.

The deal will see India's Tata Group cutting its stake in unlisted Tata Teleservices, the country's No. 6 mobile phone carrier, said the source, declining to be named due to the sensitivity of the matter.

The merged entity will be ranked No. 5 by customers.

Japan's NTT DoCoMo, which owns a 26 per cent stake in the company, will retain its holding in the combined entity, the source said. Telenor and Tata Teleservices declined comment. NTT DoCoMo could not immediately be reached for comment in Tokyo outside their business hours.

Singapore state investor Temasek owns about 7 per cent of Tata Teleservices, while Indian business man C. Sivasankaran holds about 8 per cent. It was not immediately clear if their holdings would change if the deal goes through.