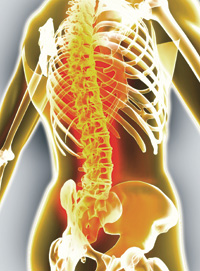 There is some hope for patients of osteoporosis, a debilitating disease in advanced stages. The disease causes fractures that are difficult to heal and treat. The patients are often advised bed rest and painkillers. One method of treating it is a procedure called vertebroplasty, where a surgeon injects a cement-like substance into cracks in the bone. This method is applied in the spine, although osteoporosis produces fractures all over the body. However, several studies have questioned the utility of this procedure given its complications.

Now, a new substance approved by US drug regulator FDA recently could alter the situation. It is a cement developed by a company called Orthovita, and it strengthens bones. In another good news, last week, researchers from the University of Utah developed a glue that holds bones together without apparent side-effects.

As chip makers keep giving us faster and more energy-efficient chips, industry observers have no doubt that they will hit a brick wall a decade or so later. Even if they do not, it is becoming difficult to increase the speed of silicon chips, while keeping them energy-efficient. Several alternatives have been proposed to silicon, but none of them are compatible with today's manufacturing techniques. Now, IBM and the California Institute of Technology in the US have jointly developed a better alternative — a process using the DNA as a model.

The DNA is used as a scaffolding to assemble millions of very small particles extremely close together and in precise patterns. Making chips with components closer together helps make smaller devices and faster computers. Current semiconductor fabrication methods cannot place components of a chip closer than 22 nanometres. But the IBM-Caltech team has managed to place particles as close as 6 nanometres. Nevertheless, the technique cannot be used to make chips right away. The dissipation of heat, as components get tinier and tinier, is a concern. Also, the technology could take 10 years to come to the market.

Nanotechnology may be the next big thing in science, but is it safe? Increasingly, doubts are being expressed about the safety of nanoparticles and nanotubes. Last year, a study had showed nanotubes are as damaging as asbestos fibres to human lungs. Now, a study published in the European Respiratory Journal says nanoparticles used in paint could kill. The study has found the lungs of a group of Chinese workers were severely damaged after inhaling nanoparticles. This is the first reported damage to health by nanoparticles, although some scientists give nanoparticles the benefit of doubt. The study examined seven women between 18 and 47 years of age. They all had a disease called plural granulomas, a lining in the lungs, formed by the accumulations of immune cells. This disease occurs when the immune system is unable to remove a foreign body. The study found excessive fluid in the workers' lung lining, and a large number of nanoparticles as well. Two of the workers died.

The particles are supposed to have entered the lungs when the women inhaled fumes produced by heating polystyrene boards. The symptoms of the patients were similar to those seen in animals that inhaled nanoparticles.