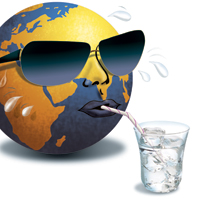 Climate models are all that we can use to predict the future climate of our planet. But could these models be simply wrong? Maybe so, according to a study published in the journal Nature Geoscience which says that predictions, including that of the Intergovernmental Panel on Climate Change, of future warming scenarios were a gross underestimate.

Scientists from Rice University, the University of Hawaii and the University of California at Santa Cruz analysed the warming that occurred 65 million years ago, and found that about half of the warming that occurred during this period can be explained by excess carbon dioxide in the atmosphere. What caused the remainder of the warming is a mystery. In a short span of 10,000 years, temperatures on the earth increased by 7 degrees centigrade. This means that there was something else going on at that time. All current climate models take into account only carbon dioxide increases. What else would heat up the earth so much? If we do not learn that quickly, we are headed for trouble.

Scientists had found a correlation between Parkinson's disease and pesticide levels in the blood. But now those at the University of Texas Southwestern Medical Centre have found another baffling correlation: elevated levels of a specific pesticide, hexachlorocyclohexane (beta HCH). This pesticide is banned in many countries, but is still used in some parts of India. It is a stable pesticide that remains in the environment for a long time. Parkinson's occurs when cells in a specific region of the brain die, and is usually not detected until significant damage has occurred.

A lens is the most important part of a camera. Lenses help to focus light, but they are brittle and sensitive, and prone to easy damage. Scientists and engineers have been trying to develop cameras — or devices that can capture images of objects — without using lenses. Now those at MIT may have found a solution, and much more. They have developed fibres that can take images of objects all the way through, and not just at one spot. And they do this without using lenses.

The fibre has three components: metal electrodes with an insulating cover, a semiconductor layer connected to the electrodes that detects and relays the light, and visualisation software that interprets the light. The MIT engineers also suggest applications using the invention. For example, it describes how clothing for soldiers can be made using the fibres, and this clothing can provide a 360-degree view by sending images to the wearer's helmet.