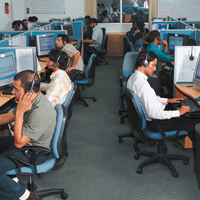 The company, part of the $15.9 billion Mahindra Group, had posted a net profit of Rs 302.50 crore in the year-ago period, it said in a BSE filing.

"I am satisfied that we have delivered profitable growth for FY13, with significant margin improvement. I am confident that with our deep domain expertise in Telecom and a full portfolio of offerings, we would be able to leverage our leadership position to deliver higher value for all our stakeholders," Tech Mahindra Executive VP Vineet Nayyar said.

In terms of revenue break-up segment wise, the company's telecom service vertical was followed by telecom equipment, BPO and others.

On the outlook, Tech Mahindra Managing Director C P Gurnani said "We are optimistic about FY 14, buoyed by our deal pipeline, business traction from recent acquisitions and leverage of business synergies with Mahindra Satyam".