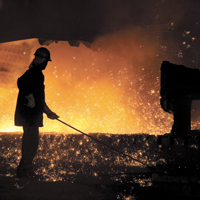 08 November, 2014
Print this article Font size -16+
Tata Steel Ltd said on 7 November it expects to amicably resolve the issue of a large fine imposed by the Odisha government for failing to adhere to mining norms in that state, insisting it has always acted within the law.

Media reports have said the Odisha government has levied a fine of Rs 5500 crore against India's largest private steelmaker for exceeding the annual limit on iron ore extraction from its mines in the state.

Tata has not disclosed the amount of the fine.

Several mining companies have been hit with fines, totalling nearly Rs 68,000 crore, in the mineral-rich eastern state. Odisha holds a third of the country's iron ore reserves, a quarter of its coal, and half its bauxite.

"We are confident of resolving the issue with the government amicably," the steelmaker said in an emailed statement, without providing further details.

"Tata Steel has received notice from the government and we will revert with our submission. We reiterate that we have always undertaken mining in Odisha and also in other states where we operate with strict conformity with the existing laws."

Tata is building another 3-million-tonnes steel plant in Odisha, down from its earlier plan of 6 million tonnes initial capacity after facing protests from settlers on the allocated land. It expects to start the Odisha plant in 2014.

India's Demand For Petroleum Products Will Grow By 7.73% In 2023: OPEC Report