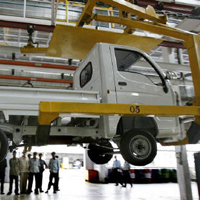 08 November, 2014
Print this article Font size -16+
Tata Motors said it has cut prices of its hatchbacks and sedans by Rs 29,000-50,000, in a bid to lure customers to a market that is on course in the current fiscal year to post the first decline in annual sales in a decade.

Tata Motors, however, raised prices of its sport-utility vehicles (SUVs) — the only bright spot in the Indian car market in recent months — by up to Rs 11,000, the spokeswoman, who declined to be identified by name, said.

The increase in prices of SUVs, after factory-gate taxes, will be as much as Rs 35,000, she added.

Earlier, on Sunday, 3 March, Tata Motors MD Karl Slym said there was need to tweak the company's strategy in India.

"In passenger cars, we are not in a strong position. We have lost market share. There are segments that are booming in which we don't have products. On new products, new features, new launches, we have been rather quite, we need to change that," Tata Motors MD Karl Slym told PTI on the sidelines of BCIM car rally here.

Slym said that the company would adopt short, medium and long-term measures to address that.

"In the short term, and I am talking in terms of months, there will be mild changes. In the medium term that is a year or a little more, there will be drastic changes with new products. In the long term, there will be a portfolio revision", Slym said.

Tata Motors, the vehicle sponsor for the rally from Kolkata to Kunming, was a dominant player in the commercial vehicle segment.

"Tata Motors has a major market share in the commercial vehicle segment at 62 per cent. We are a very dominant player.

Slamming the government for raising excise duties in the budget on SUVs, Slym said, "The government believes it can gain more revenues by taxing SUVs.

"The only three sections doing well in India are diesel, SUVs and luxury cars," he said.

"The government instead of trying to help, maybe some of the struggling segments, is seemingly trying to stifle some other segments slightly remaining to be okay," Slym added.

Slym, who was the former head of GM India before joining Tata Motors, said, "I believe it should be a free market for fuel anyway. There should not be any kind of regulation. So I am happy for that to happen (referring to the deregulation of fuel prices).