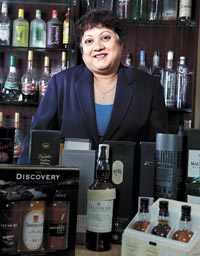 So, where does one begin? Which is the best? Calm down. Let's study some geography now that we have touched upon history. Scotland is divided into five (four, if I'm to be correct and not told off by those in the know) whisky-producing regions, each giving a hint of what they offer. The Highland malts are full flavoured with great character, some hinting at sherried sweetness, some gently smoky. The sweet, mouth-watering Glenmorangie, silky Oban, buttery Clynelish, the marmaladey Dalmore, the soft Dalwhinnie and the bold Glen Ord. Speyside, though the heart of the Highlands, is often looked at on its own. Its fertile valleys house almost 60 per cent of Scotland's distilleries. Big, warm, deep, fruity malts come from here. Glenfiddich, The Glenlivet, The Macallan, The Balvenie, Cardhu, Cragganmore, Glen Elgin, Glen Rothes...

The Lowlands are the gentle souls. Soft, easy and calming. Glenkinchie and Auchentoshan are front runners. Campbeltown, well, all I can say is "once upon a time it thrived, now it barely survives". Then there are the islands. Orkney on the head of Scotland — freezing cold with Highland Park and Scapa being saviours of its natives. My favourite is Talisker, from the Isle of Skye. Sweet and luscious with a huge smoky push at the end. Tobermory from Mull and Isle of Jura from Jura. But the smoky, peaty, phenolic monsters from Islay are the ones to reckon with. You either love 'em or hate 'em. Ardbeg, Lagavulin, Laphroaig, Caol Ila. Smoked Goa sausages and spicy smoked pepperoni. Seriously. Bunnahabhain is the exception. Its easy palate almost makes you wonder, Islay? Really?

Now, here's my most basic cheat sheet. It is designed simply to put it all in perspective.
Level 1: This is the beginning. Glenmorangie 10, Glenfiddich 12, Glenkinchie 12, Dalwhinnie 12, BenRiach Heart of Speyside, Glen Elgin 12, Clynelish 14

Level 4: Anything above 18, as your palate is well seasoned now!

The key to opening up your palate is to taste everything that comes your way. I have just started you off. Stay with what you like till you find something better. The best is yet to come.

Finally, there is life beyond Scotland. Try the Irish — the bold and chewy Bushmills from Irish distillers or the fiery, peated Connemara, the elegant Locke's and the mellow Tyrconnell. There are the defiant Japanese — Yoichi, Yamazaki and Nikka. And when you think you're done, out pops a range of single malts from a Bangalore distillery, Amrut. There is the sweet, biscuity Amrut Single Malt, and the warmly peaty Amrut Fusion Single Malt (a blend of Indian and pea-ted Scottish barley) with a sweet toffee nose, hint of spice on the middle enveloped by a honeyed finish. Close your eyes and sip. Taste history.