Talking Away The Problems 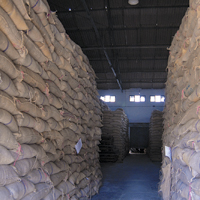 With drought turning into a reality, and speculation and hoarding spiralling food prices, the agriculture ministry is planning to amend the Prevention of Black Marketing and Maintenance of Supplies of Essential Commodities Act (1980) such that the Centre can take action against hoarders of food grains directly. But that amounts to treating the symptom rather than the disease as the government is yet to come up with a comprehensive drought management mechanism.

The Act, in its current form, allows both the Centre and the states to detain hoarders and also modify or revoke these orders. This leads to a conflict of authority as the Centre's orders can be countered by the state governments. "This is a loophole that needs to be plugged, but it would need concurrence of the state governments," says a senior official in the agriculture ministry.

Agriculture Minister Sharad Pawar has convened a meeting of agriculture and food ministers of all states by August-end to discuss this amendment and the need for stringent monitoring. Last week, an internal meeting chaired by Agriculture Secretary T. Nanda Kumar also discussed these issues.

Indian agriculture remains dependent on rains, even though the area under irrigation has expanded 161 per cent from 22.6 million hectares in 1950 to 59 million hectares in 1990. This is because 42 per cent of the irrigation systems are dependent on surface water, or are rain fed. Tanks, tube wells and other ground water sources contributed 51 per cent, while the rest comes from other sources.

Meanwhile, the government seems to be groping in the dark for solutions to the drought crisis. At a recent meeting to discuss the drought, Prime Minister Manmohan Singh exhorted Pawar and Cabinet Secretary K.M. Chandrashekhar to come up with an action plan. But no solution has been suggested by either. The government has "not even been able to manage existing food grains that are rotting due to unavailability of storage facilities", says Vijay Sardana, a leading agri-economist and managing director of ARPL Agri Business Services.

Despite the government's claim that the Food Corporation of India can manage more than 25 million tonnes of rice and wheat for 2008-09, sources say at least 15-20 per cent of the stored food grain has been rendered unusable by rodents and poor storage.

As the government faces a sea of questions, the nation eagerly awaits an answer.