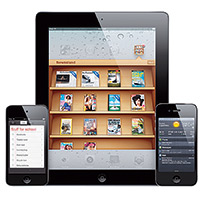 08 November, 2014
Print this article Font size -16+
The Apple-Samsung patents battle rages on, and now the Barack Obama government seems to have been roped in. Recently, the US International Trade Commission (ITC) banned the sale of some older iPhones and iPads in a ruling that favoured Samsung Electronics over Apple. But soon after, the American government overturned the ITC ruling, saying the decision was in part based on its “effect on competitive conditions in the US economy and the effect on US consumers”.

Ironically, a few days after the ban was reversed, ITC announced another ruling that Samsung had violated two of Apple’s iPhone patents and must end US import of some of its products. Now, one needs to wait and see if the American government will step in again,  this time in Samsung’s favour. Industry trackers hope it will, since such strict intellectual property laws have a huge negative impact on the masses.

Grounded
The US government recently sued to block American Airlines and US Airways’s proposed merger to create the world’s biggest airline, saying consumers would end up paying higher fares and fees. The surprise move may delay, or even derail, a merger set to close in September and could stall a broad industry restructuring that investors were counting on to support airline profits. It also could hinder American’s parent AMR Corp’s efforts to emerge from its nearly two-year-old bankruptcy. The justice department, which has in recent years allowed two major airline mergers to go ahead, said it is out to block the $11-billion deal entirely rather than seek concessions.
Firefight
Employees getting fired for innocuous deeds is not news, but a CEO apologising for the manner of firing definitely is. AOL Inc chief executive Tim Armstrong said in a staff memo recently that he made a mistake in publicly firing Abel Lenz in front of a 1,000 workers. Armstrong fired Lenz after he told the creative director at AOL’s Patch unit to put down his camera. “I am accountable for the way I handled the situation, and at a human level it was unfair to Abel,” Armstrong said in the memo. He added that he apologised directly to Lenz as well. The CEO said he had asked Lenz not to record meetings earlier as well.

Out Of The Bottle
HJ Heinz, the world’s largest ketchup maker, said it plans to eliminate 600 jobs across North America. The move follows the $28-billion sale of the firm to Warren Buffett’s Berkshire Hathaway and private equity firm 3G Capital earlier this year. “Our new organisational structure will simplify, strengthen and leverage the company’s global scale, while enabling faster decision-making, increased accountability and accelerated growth,” said Michael Mullen, a Heinz senior vice-president. The eliminated positions are all white-collar jobs, with 350 layoffs at the firm’s Pittsburgh headquarters. The cuts follow a June shakeup that saw 11 top executives leave. After the cuts are complete, the firm will still employ around 6,000 people across North America.

Orient Calling
Whirlpool Corp said it will buy a majority stake in China’s Hefei Rongshida Sanyo Electric for $552 million as the world’s largest maker of home appliances seeks to expand its sales in Asia. Hefei Sanyo, which makes washing machines, microwaves and refrigerators sold under the Sanyo, Rongshida/Royal Star and Diqua brand names, competes with big Chinese firms such as Haier Electronics and GD Midea. It reported a net profit of $48 million on sales of $636 million last year.

Cutting The Cord
Foxconn Technology, known for assembling Apple’s iPhones, will decide by year-end whether to branch off into unconventional new territory: making solar panels in China. It’s an industry plagued by overcapacity, and panel prices have tumbled by over two-thirds in two years. Yet, some say Foxconn — which has been testing the market for two years — may end up timing it right, moving in just as the sector shows some signs of stability. It intends to cut its reliance on Apple, which accounted for around 60 per cent of its parent firm Hon Hai’s $100-billion-plus revenue last year.

A Speed Bump
The pace of economic growth has slowed in Japan, casting doubt over its ambitious stimulus plan and a planned tax hike. Its economy grew at an annual rate of 2.6 per cent in the second quarter of 2013, as ooposed to an expected 3.6 per cent increase. Markets hope this will cause policymakers to delay or suspend an unpopular tax increase — doubling consumption tax to 10 per cent by 2015 — that can take a bite out of growth just when the bold economic stimulus plan appears to be bearing fruit.

The Penny Drops
Seven people who ran a more than $140-million scheme that preyed on investors in 35 countries by fraudulently inflating the price of penny stocks were recently arrested in the US. Two other people, including the alleged mastermind, were charged but remain at large. The scheme led to one of the largest international penny stock investigations ever conducted by the US. The defendants used US securities markets as a platform to run elaborate fraudulent schemes, including wire fraud and false personification of Internal Revenue Service employees, an attorney said, adding, “where others saw citizens of the world, the defendants saw a pool of potential marks”.

Telling Numbers
Banks cut 5,500 branches across the European Union (EU) last year, 2.5 per cent of the total, leaving the region with 20,000 fewer outlets than it had when the financial industry was plunged into a crisis in 2008. Last year’s cuts come after 7,200 branches were axed in 2011, according to data from the European Central Bank. EU banks have been closing branches to trim operating costs and improve their battered earnings. Consumer take-up of online and telephone banking services has accelerated the trend. The data shows EU banks cut 8 per cent of branches in aggregate in the four years to the end of 2012. Greece saw one of the biggest cuts, shedding 5.7 per cent of its outlets.

The Power Of Two
The German and French economies grew faster than expected in the second quarter, bettering a widely heralded expansion in the US and pulling the euro zone out of a year-and-a-half-long recession. The increased pace was primarily driven by renewed business and consumer spending in the 17-country bloc’s two largest economies. The euro zone economy was fragile overall, however, with some countries, notably Spain and Italy, still struggling. The 0.3 per cent euro zone growth for the three months to June meant a nascent recovery was on a more solid footing. The EU has been in a debt crisis for more than three years. France grew by 0.5 per cent, and Germany by 0.7 per cent.