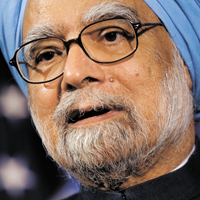 Prime Minister Manmohan Singh’s snub to the United Nations (UN) over the legal status of the Copenhagen Accord of 18 December 2009 is a reminder that a global climate deal is still a pipedream. The other members of the BASIC group — Brazil, South Africa and China — also have maintained that the accord, which they drafted along with the US, was merely a statement of intent and not of agreement. This leaves the UN in an awkward position: there are few takers for the accord among the developing countries while its existing deal, Kyoto Protocol, has been rendered moribund because of the US’s persistent rejection and the Europeans’ desire to revise it or get out of it.

Singh’s dismissal of the UN’s demand that India declare its willingness to join the accord and register its emission cut targets and climate programmes by 31 January 2010 only accentuates the stalemate in the climate negotiations. The BASIC countries are worried that though the accord provided for voluntary action and targets, the UN’s attempt to give the accord a legal character will turn those assurances into commitments.
To make matters worse, the raging controversy over the inclusion of unscientific data in the latest reports of the Intergovernmental Panel on Climate Change (IPCC) has melted away a lot of the political support for a climate deal.
People in the developed world are already questioning their governments’ taxation, investment and aid programmes meant to switch from carbon dioxide-intensive production and consumption to costlier, but cleaner alternatives.
(This story was published in Businessworld Issue Dated 08-02-2010)
Tags assigned to this article:
magazine manmohan singh un global warming ipcc feroz ahmed copenhegen