New Delhi [India], February 2 (ANI): The forever diva and veteran Bollywood actor Tabu on Tuesday treated fans and followers with an alluring monochrome picture from her latest photoshoot.
On Instagram, the 'Andhadhun' star shared a captivating picture that shows her donning a loose white collar shirt while posing for the camera. With kohl-rimmed eyes and a wet hairstyle, she looks stunning. 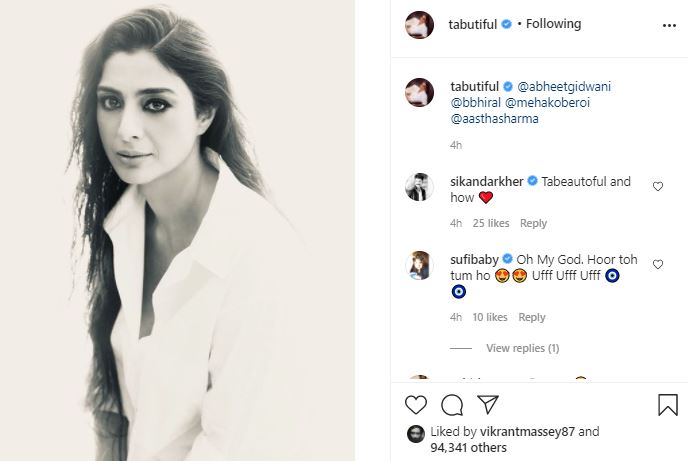 The picture garnered many likes within a few hours of posting with actor Sikander Kher's comment "Tabeautoful and how," with a red heart emoticon.
The 'Haider' actor also celebrated one year anniversary of her last film 'Jawaani Jaaneman' by sharing a quirky behind the scene video clip of the movie which also starred Bollywood actor Saif Ali Khan and actor Pooja Bedi's daughter Alaya Furniturewalla who debuted Indian cinema with this movie.
Meanwhile, on the work front, Tabu will next be seen playing a pivotal role in 'Bhool Bhulaiyaa 2' which also features Kartik Aaryan and Kiara Advani in lead roles.
The comic supernatural thriller will be helmed by Anees Bazmee, unlike the first one which was directed by Priyadarshan. The first part of the film was a remake of the Malayalam blockbuster 'Manichitrathazhu' which starred Akshay Kumar in the lead besides, other actors including Vidya Balan, Shiney Ahuja, and Amisha Patel.
'Bhool Bhulaiyaa 2' is produced by Bhushan Kumar, Murad Khetani, and Krishan Kumar under the banner of T-Series and Cine 1 studios. (ANI)