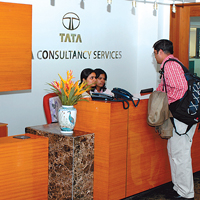 Net profit for the fiscal fourth quarter ended March 31 rose to Rs 3,597 crore from Rs 2,946 crore in the year-earlier period, TCS said in a statement on Wednesday after Indian markets had closed.

That was roughly in line with an average earnings estimate of Rs 3620 crore  among 20 analysts polled by Thomson Reuters I/B/E/S.

TCS expects its deal pipeline to be strong and the fiscal year 2014 to be better than 2013, the company's chief executive officer, N Chandrasekaran, told reporters on Wednesday, 17 April 2013.

TCS, which plans to add 45,000 staff in the fiscal year 2014, reported a 22 per cent rise in quarterly profit after winning orders from customers, including Nokia and BNP Paribas, earlier on Wednesday.

It also said it expects revenue in the current fiscal year to grow in excess of the National Association of Software and Services Companies (Nasscom) forecast of 12-14 per cent export growth for the sector, in constant currency terms.

By comparison, No.2 player Infosys Ltd on Friday forecast dollar revenue growth of 6-10 per cent for the new fiscal year, which was lower-than-expected, disappointing investors and sending its shares down 21 percent.

Infosys has struggled to implement a strategy of generating a higher proportion of revenue from its own software platforms, and its market share has been essentially flat for the past two years. By contrast, TCS has focused on more traditional outsourcing services.

The company said it added 52 new clients in the quarter and that the pipeline of large potential deals has grown.

"We have endeavoured to maintain our profitability despite stiff headwinds and increased volatility through the year," Rajesh Gopinathan, chief financial officer, said in the earnings statement, released after the close of markets in India.

Sector investors have been rattled by Infosys' guidance, pending U.S. legislation that would make it more expensive to send workers there on temporary visas, and a rising rupee fuelled by the global slump in commodities, which pushes down overseas revenue in local currency terms.

The BSE IT services index fell 1.14 per cent on Wednesday ahead of the TCS results, underperforming the broader market, which was down 0.07 per cent.

Third-ranked Wipro Ltd is expected to say profits rose 14 percent when it reports earnings on Friday, according to Thomson Reuters I/B/E/S.

TCS Falls 2% Ahead Of Results
Shares of IT major TCS fell by nearly 2 per cent ahead of its quarterly results on Wednesday, 17 April.

In terms of volume, 3.48 lakh shares of the company changed hands on the BSE, while over 26.39 lakh shares were traded on the NSE.

The company commands a market value of Rs 2,85,597 crore -- the highest for any listed firm in the country.

The company's performance was encouraging for the sector in view of that fact that IT market bellwether Infosys had reported just over 3 per cent growth in its net profit.