New Delhi [India], February 21 (ANI): While the nation continues to feel the void left by late Bollywood actor Sushant Singh Rajput, one of the country's most eminent awards in entertainment, Dadasaheb Phalke Award, has honoured the star with the 'Critic's Best Actor' accolade in the prestigious award ceremony held on Saturday.
Sushant Singh Rajput, who began his acting career in 2008 with the TV show 'Kis Desh Mein Hai Meraa Dil', became a household name when he grabbed the lead role in Zee TV's 'Pavitra Rishta' opposite Ankita Lokhande. Soon after he reached the peak of his career he left the television industry to test his coin in the Hindi film industry.
In 2013, he made his Bollywood debut with 'Kai Po Che', and with that, the talented actor bagged on to entertain his fans and audience with the charm of his astonishing performances.
To honour the actor who left to heavenly abode on June 14, 2020, the prominent Dadasaheb Phalke award honoured him with 'Critic's Best Actor' accolade.
The official Instagram account of Dadasaheb Phalke International Film Festival announced the same and wrote, "Celebrating the dedication you've shown on the way to this achievement. Congratulations to Late @sushantsinghrajput for winning the "Critic's Best Actor" award at Dadasaheb Phalke International Film Festival Awards 2021. We miss you!" 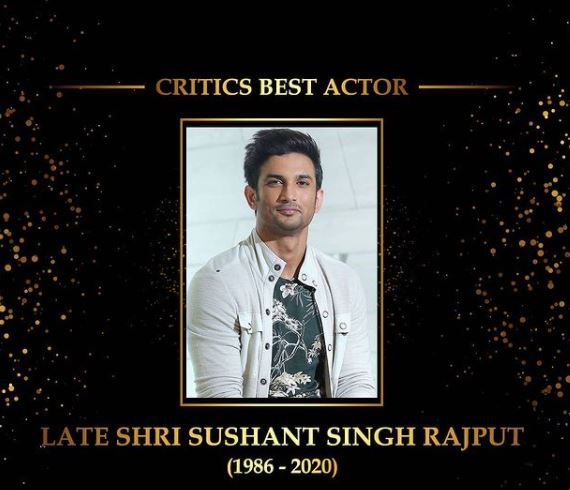 The talented actor, who died under mysterious circumstances in his apartment, was last seen in 'Dil Bechara' opposite Sanjana Sanghi.
Directed by Rajput's close friend Mukesh Chhabra, the romantic flick is adapted from the famous novel 'The Fault In Our Stars' by John Green and also featured actor Saif Ali Khan in a special appearance.
The flick was originally slated for May 8 theatre release but it could not see the light of the day due to the shuttering of cinemas owing to the coronavirus crisis and later was released on July 24, 2020, on Disney+ Hotstar and streamed for free to commemorate the last movie of Sushant.
Of the late, an investigation by Mumbai Police had considered it an instance of suicide. The family of Sushant, including his father and sisters, had challenged the same and had documented an FIR in a Patna court against his former girlfriend and actor Rhea Chakraborty, and her brother Showik Chakraborty, for abetment to suicide and siphoning his assets.
Three central agencies - the Central Bureau of Investigation (CBI), Enforcement Directorate (ED), and Narcotics Control Bureau (NCB) - had examined the case from different angles. (ANI)