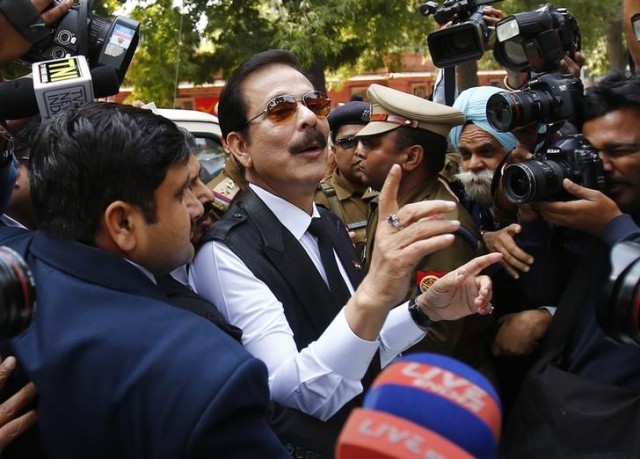 03 December, 2014
Print this article Font size -16+
Sahara conglomerate has won the Supreme Court's approval to sell four of its domestic properties, which it said would raise 26.22 billion rupees ($424 million), crucial to secure the bail of its jailed chief.
Sahara Chairman Subrata Roy has been held in a New Delhi jail for almost nine months in a long-running dispute with the Securities and Exchange Board of India (Sebi) over the refund of billions of dollars the group raised in outlawed bonds.
The court allowed the group to sell properties in Jodhpur, Pune, Chauma in Gurgaon and Vasai in Mumbai.
A bench headed by Justice T.S. Thakur was told that the transactions for these properties would be completed by May 2015 and in the meantime, the purchasers would deposit post-dated cheques in the name of Sebi-Sahara refund account with undertakings that those would be honoured on due dates.
The Supreme Court has asked Sahara to deposit 100 billion rupees initially to release Roy on bail. Sahara has said it would mortgage or sell its overseas hotels, including the Plaza in New York and Grosvenor House in London, to raise funds.
Sahara had sought the court's approval to take over a Bank of China loan on the overseas hotels and also raise $650 million more in loans through a refinancing to pay off the bail money.
The court has sought more information from Sebi and Sahara on the refinancing of the overseas properties and will hear the case next on December 17.
(Agencies)
Tags assigned to this article:
supreme court news 3 subrata roy sahara group securities and exchange board of india bank of china