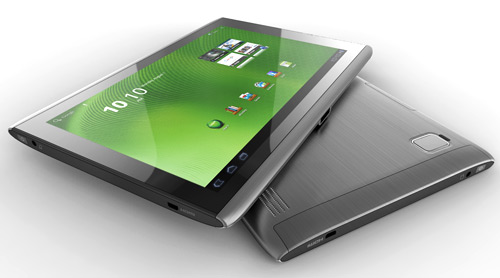 Under the hood, the A500 houses a capable NVIDIA 1GHz dual-core Tegra 2 processor with 1GB RAM, and on the storage front features 16GB onboard with the ability to add another 32GB via microSD card. A neat addition is a full-size USB port – great for on-the-go use with thumb drives, and USB keyboards and mice. There's news that a future software update may also allow you to connect your USB internet dongles directly to the A500 for on-the-go connectivity (the current unit was Wi-Fi only). Also, with the A500, you get a mini-HDMI port, but there's no cable in the box, you'll have to hunt a bit to get the correct adapter cable.

Stacked as it is in the specs department, it came as no surprise that games ran smoothly and HD videos played with consummate ease on the device. Even the new Android 3.0 interface with all its animation effects ran without any fuss (more on that in the box). The rest of the experience was middling, with an average 5MP rear camera and battery performance that's pretty bog-standard.
Verdict? The pricing is right, so are the specs. It's laudable that Acer pipped Motorola and Samsung in launching early. But the build and the Honeycomb platform leaves a lot to be desired, and I'd suggest you wait and watch for other entrants to launch their Honeycomb tablets so you have some options to choose from.