New Delhi/Bengaluru [India], February 16 (ANI): Students in Delhi and Bengaluru held protests against the arrest of 21-year-old Disha Ravi and demanded her immediate release.
Student activists of All India Students' Association (AISA) were on Tuesday seen protesting outside the Delhi Police headquarters demanding the immediate release of arrested 'climate activist' Disha Ravi.
AISA activists were seen protesting with placards amid slogans of 'Inquilab Zindabad' and 'Disha Ravi ko riha karo' on Tuesday.
Kaushik Raj, a student of Jawaharlal Nehru University (JNU) told ANI, "Today we are protesting at the Delhi police headquarters. We are here to stand in support of Disha Ravi. We want the Delhi Police to immediately release Disha Ravi."
Another student from the University said the 21-year-old climate activist was arrested because she came in support of the farmers. The Modi government is jailing everyone who is coming in support of farmers in the country. This clearly shows that Prime Minister Narendra Modi, Shah are afraid of the voices being raised to oppose them. The Unlawful Activities (Prevention) Act and the sedition laws are the only 'toolkit' of the current government.
Meanwhile, in Bengaluru, the National Students' Union of India (NSUI) student activists staged peaceful protests at Maurya Circle against the arrest of Disha Ravi demanding her immediate release. 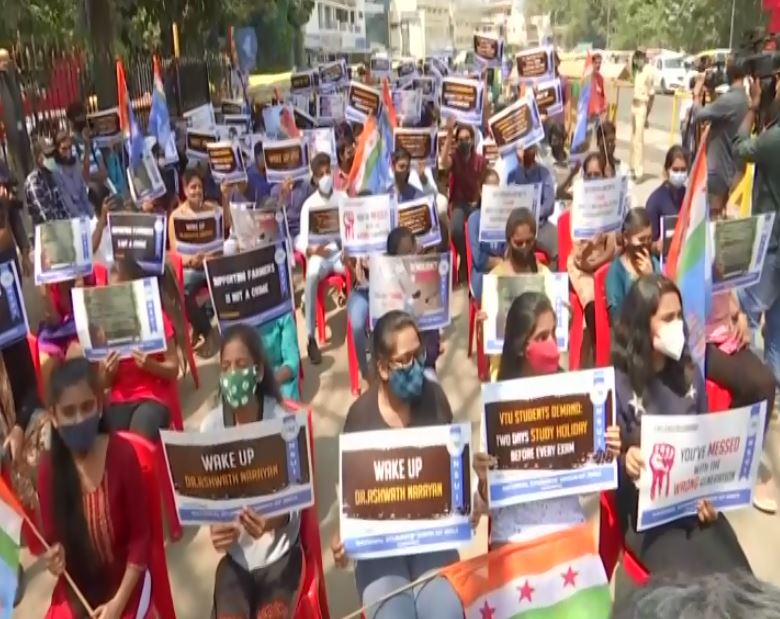 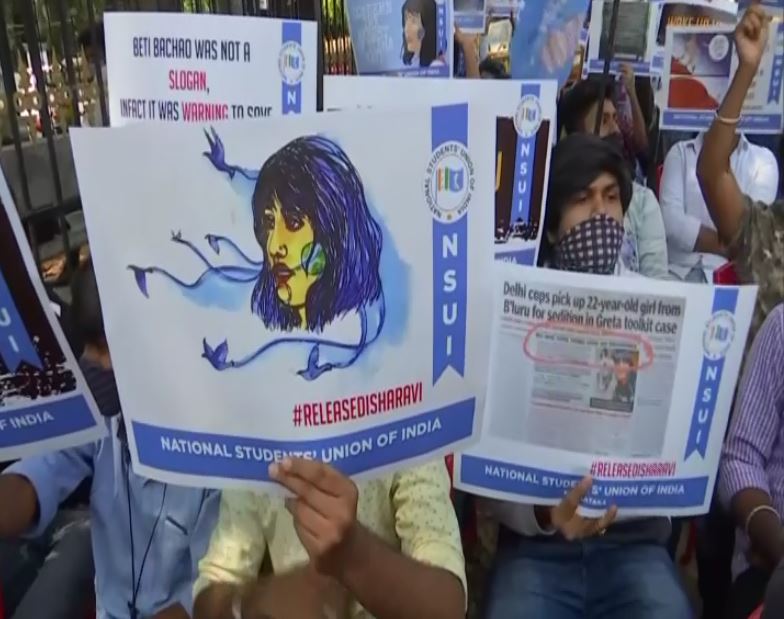 A student participating in the protests told ANI, "Disha is not only a climate activist but also a student from our state. We want to protect the integrity of students as well as our state. Our biggest concern is that the Delhi Police could not find the real culprits of the Republic Day violence, could not register an FIR for the next two-three days, and all of a sudden the Delhi Police comes all the way from Delhi to Bengaluru to arrest a student in connection with the Delhi violence."
"The Delhi police cyber cell is targetting Disha through the 'Toolkit'. What actually is a 'Toolkit'? 'Toolkit' is a set of directives or suggestions on a particular issue that attracts protests, which in this case is the farmers' issue. The Delhi Police is clearly scapegoating Disha Ravi and we completely condemn this act," he added.
The 21-year-old activist was arrested from Bengaluru in connection with the formulation and dissemination of the Toolkit document, in the ongoing farmers' protest. She was one of the editors of the 'Toolkit' document.
Disha was later sent to five days of police custody. Later on Monday, the police also issued a non-bailable warrant against activists Nikita Jacob and Shantanu, a resident of Beed in Maharashtra.
According to the Delhi Police, the editors of the toolkit collaborated with the pro-Khalistani Poetic Justice Foundation to spread disaffection against the Indian state. Disha was the one who shared the Toolkit Doc with Greta Thunberg.
Last week, Disha was presented before a Delhi Court that remanded her five days of police custody. Disha Ravi broke down inside the courtroom and told the judge that she has edited only two lines and she wanted to support the farmers' protest.
Earlier, the Delhi Police sent a communication to Google seeking registration details and activity log of the account through which a "toolkit" related to the farmers' protest was created and uploaded on the social media platform. (ANI)