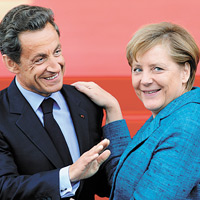 Reports say that IT services behemoth Infosys may soon buy the health care business of Thomson Reuters for $700-750 million. This will be the largest buy in Infosys's history. In the second quarter of 2011, Thomson Reuters had revealed its plans to sell the business as part of its structural rejig.

It's Enough
Suzuki Motor Corp. said it wants to end its two-year-old ties with Volkswagen, just a day after Volkswagen said the Japanese auto giant breached an agreement by buying diesel engines from Fiat. Suzuki chairman Osamu Suzuki has said his firm could not get the technological transfers it wanted. Meanwhile,  Fiat's CEO Sergio Marchionne has said Suzuki will be an interesting partner for it in Asia.

Closing Time
The employee strike at its plant in Manesar,  Haryana, has forced Maruti Suzuki to shut operations of both its plants in the state from
16 September. On Thursday, the 18-day-long strike turned violent as a group of supervisors were attacked on their way to work. The unrest is spreading to Maruti's sister firms. About 7,000 workers at its three factories went on a strike on 15 September.

Talking Tough
Insurance regulator Irda is planning to slash companies' exposure to promoter firms. The watchdog's draft guidelines on investment norms say corporate houses will not be allowed to invest more than 5 per cent in group firms, against 25 per cent now. Meanwhile, Irda has said that health insurance portability service, which allows policy holders to switch insurers, will be introduced in the country from 1 October.

Can You Match it?
China has unveiled its first ultra-light civilian helicopter at an international exhibition held in the country. The one-tonne AC310 chopper, sporting a fuel-efficient engine and flexible rotor system, can carry 2-3 three passengers and fly up to 159 km per hour, according to its makers the Aviation Industry Corporation of China.

A Tab To Test
Yes, the rumours were right. At the Build conference in California, Microsoft gave developers free, Core i5 tablets loaded with its upcoming operating system, Windows 8. The "Developer PCs" are meant for building and testing apps, including those meant exclusively for tablets.