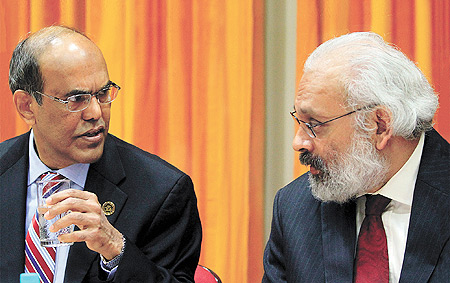 Should savings bank interest rates have been raised at this juncture? They constitute roughly 22 per cent of the total deposit base of the banking system. The current hike apart, not everyone is happy with the thought of the eventual deregulation either. "Casa (current and savings account) deposits, which are core deposits, will become volatile," says Mohan Shenoi, treasurer at Kotak Mahindra Bank. "Currently, in liquidity statements, they are included in the 1-3 year range. Now, we will have to put them in the less- than-one-year bucket. And that could change the cost of deposits significantly."
break-page-break
Others think deregulating savings banks rates is necessary. "Savers need to be compensated especially as inflation levels are around 8.5 per cent," says South African FirstRand Bank's treasurer Harihar Krishnamoorthy. "Policy transmissions get muted when a large part of deposits are at low, fixed levels and render lending rates less dynamic."

Stimulus Versus Response
What will banks do? "Most banks will try to maintain margins, but a large part would have to be passed on through increase in lending rates, say 50 to 100 bps," said Chanda Kochhar, managing director and chief executive officer, ICICI Bank, at the bankers' conference after the annual policy announcement. "By definition, EMIs should go up," said Aditya Puri, managing director and CEO of HDFC Bank, at the conference. "The RBI has made money dearer. Now, the banks' asset liability committees (ALCO) will make the final decision (on interest rate hikes to borrowers), but there could be a 50-bps hike in lending rates."

Puri was right. IDBI Bank announced a rate hike in its base lending rate of 50 bps within hours of the policy announcement on 3 May. Punjab National Bank and Yes Bank followed the next day announcing similar increases. LIC Housing Finance and Bank of Maharashtra were next. In the coming days, the entire banking sector will follow suit.

Banks have another problem on the big deposits side, too. The RBI has sought to reduce the interdependence of banks and mutual funds in managing liquidity. Over the past years, banks' investments in liquid funds of debt-oriented mutual funds (DoMF) have grown manifold. DoMFs are huge lenders in overnight money markets, especially in the collateralised borrowing and lending obligation market, where banks are the biggest customers.

DoMFs invest heavily in certificates of deposit (CD) of banks. "Such circular flow of funds between banks and DoMFs could lead to systemic risk in times of stress or liquidity crunch," the RBI said. Accordingly, it capped banks' investment in liquid schemes of DoMFs at 10 per cent of their net worth as on 31 March of the previous year and has given them six months time to comply.

Bank treasurers say this could result in a reduction in banks' earnings, besides affecting mutual funds. "It will also impact mutual funds' assets under management, although the impact will be differential," says Bekxy Kuriakose, head of fixed income at L&T Mutual Fund.

Prudence And The Bitter Pill
The forced reduction in reliance on mutual funds is part of the prudential regulatory change announced in this year's monetary policy. There have been changes to provisioning norms, which could have considerable impact on banks' after-tax profits in the coming year or two.
Why? Because with long-term increases in interest rates — that is the expected impact of the recently announced measures — non-performing assets could go up dramatically for many banks. The increase in provisioning is preemptive, to make sure balance sheets are not stressed. Provisioning for substandard assets (those that are overdue for 91 days) is now 15 per cent (up from 10 per cent) and that for doubtful assets (overdue for a year) is 25 per cent (from 20 per cent).

What will this do to credit growth that has been almost 23 per cent compared to the targeted 17 per cent? "The increase in provisioning, by itself, should not have any impact on credit growth," says FirstRand's Krishnamoorthy. "It may impact profits on a one-time basis for some banks, though."

It is not all tightening, though. In another move that could help the government securities (G-Secs) market, the RBI increased the time span for short selling of G-Secs from five days to 30 days. "We have been receiving requests for this," says Shyamala Gopinath, RBI deputy governor. "Till now, it was not possible to take long positions in interest rate futures (IRFs). This will help investors take long positions in IRFs and encourage a term repo market."

This policy may have restored the RBI's credibility as inflation fighter in some corners, but it has also worried others; some wonder whether the end of the tightening cycle is far from over. "The RBI has also said that there are clear upside risks to inflation because of oil and commodity prices," says a bank economist.