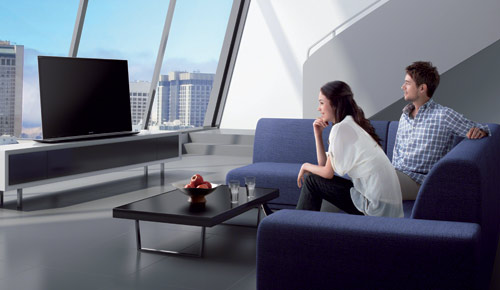 08 November, 2014
Print this article Font size -16+
There used to be a time when an "It's a Sony" used to end all TV purchase arguments, but of late, their neighbours from across the Sea of Japan have pulled out all the stops to take the lead in the LCD/LED TV market. Does the 2012 HX850 series, specifically the 46HX850 unit I've looked at, do enough for Sony to regain its mojo?

It certainly ticks of the first impressions box pretty comprehensively. A single sheet of Edge-to-edge Gorilla Glass — the same durable glass that's found in the top smartphones today — topped off with a thin sliver of silver trim around the edge gives the TV a sleek and streamlined look, and the well-weighted plastic stand does well to support the TV yet allow a stable left-right swivel. The clean look means that there is no integrated camera or a microphone, which means none of that gimmicky gesture or voice control I've seen recently. It also means you'll need to pay more for mic/camera if you want to use Skype.

Around the rear of the cabinet are the HX850's numerous inputs and output connections - two HDMI ports, two USB ports, an RGB (PC) video input, and 3.5mm PC audio in and out jacks all face sideways for easy access, while the composite and component AV jacks and a connector for an optional external speaker stand are face the rear. A cable/antenna port, an Ethernet port, an optical audio output, and two additional HDMI ports round out an impressive list of connections, but some of these can be quite a challenge to get to if the TV is wall-mounted.

The remote is rather standard Sony stuff, but is light and comfortable to hold. No backlight on the buttons though, so it can be a fumble to operate in the dark, and there's no 3D button to navigate to the 3D settings directly, you'll need to wade through the menu system for that.

It's a good thing then that one is distracted by how good the picture quality gets on this TV, and Sony's X-Reality Pro image processing produces stunning natural colors and excellent contrast levels. Dark scenes look better than any edge-lit LED TV and are getting remarkable close to plasma levels. Picture quality is detailed and sharp and 3D, for those of you who care for it, shows satisfactory depth, but you'll have to cough up even more money for 3D glasses. Audio quality is respectable, given the poor quality I've seen on a number of TVs these days, and it will meet the needs of most.

Like the competition, the TV features built-in Wi-Fi and wired Internet connectivity and gives you one-touch access to watch a host of video websites such as BigFlix, Sony, STAR, DailyMotion, not to forget on-screen widgets which let you stream your Facebook and Twitter feeds discretely on one side of your TV screen. But what excited me the most was the fact that the Opera TV App Store has made its way onto the TV, which lets you download a ton of TV-optimised apps and games — really shows the way forward for app adoption on TVs.

All in all, Sony's pushed out a competent TV that does justice to the content you throw at it, but having to pay more for accessories that really should have been part of the bundle is a downer for sure. It's a competent offering in the market, but it will take more than the odd brilliant TV to turn their ship around and tackle the Korean onslaught.