Strike One For Debt 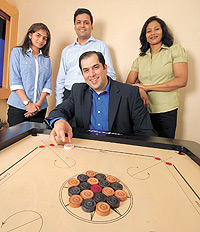 
Working in tandem with VC firms such as Helion is a part of a conscious strategy. All 16 deals that SVB has done so far in India have been with VC-backed companies. "Such companies will always be a significant portion of our client base. This is what makes us unique. Our typical early-stage clients do not have many alternatives for true bank financing at that stage," says Ash Lilani, president-India region, SVB Financial Group. It is also a useful strategy for protecting the firm's downside, given that startup companies can have erratic cash flows.

Flexible Loans
For startup companies, especially those that have raised one round of VC funding and have somewhat stable revenue, venture debt can be a good alternative to raising equity capital from VC firms. "It does not make sense for young companies to raise equity capital to finance things such as equipment purchases and other working capital needs," says Hattangdi. The debt can also be a bridge between successive rounds of VC fund raising. It is a cheaper source of capital — SVB lends at 13 per cent interest rates — and does not require dilution of stake.

However, the most important advantage of raising venture debt is that, unlike traditional bank loans, it is collateral free. SVB, for instance, looks at the company's management team, investors and business model. It also has the option to invest in the company by way of warrants, which is typically 5 per cent of the loan amount, at a favourable valuation,  says Helion's Natarajan.

break-page-break
This kind of flexibility has allowed for a flourishing venture lending business in the US, which has spawned several venture lending institutions such as Western Technology Investment, Hercules Technology Growth Capital and Square 1 Bank, apart from SVB.

However, as there are advantages, there can be pitfalls too for startups raising venture debt. To begin with, while it is cheaper than equity capital, it also imposes an extra interest burden and young companies may find it difficult to service the debt. "Also, venture debt comes with financial covenants and if the company starts running out of cash, the lender can (most of the time) sweep out remaining cash from the company," says Alok Mittal, managing director of Canaan Partners India. A Canaan portfolio company, Delhi-based iYogi, has been a recipient of debt from SVB, which the VC firm helped facilitate. iYogi's chief executive officer Uday Challu could not be reached for comments.

Repayment Matters
Another factor with venture debt is that repayment starts immediately and the repayment period is much shorter at three years. This is also one of the reasons why SVB lends only to VC-backed companies, especially in India. The company either lends as part of an ongoing VC- funding round, where the deal can be structured as part debt and part equity, or it backs a company that is expected to raise VC funding in 3-6 months.

What: A combination of secured loans and warrants, usually available to a firm that do not have positive cash flows or assets

Why: Cheaper than equity capital for financing working capital, equipment purchases, accounts receivables. Use as a bridge between venture-capital fundraising rounds

"With startups, growth can be erratic; revenues can be rolled back. You have to work through a deal," says SVB's Hattangdi, who has been in a couple of tough situations already. Back in 2008, one of its portfolio companies, for instance, raised debt six months prior to raising VC funds. However, because of the recent global financial slowdown, the startup's fund-raising was delayed by 12 months. "There has to be an ongoing dialogue with the company. In many ways, we operate almost the same way as a VC investor," says Hattangdi.

That should be comforting news for startups. It also helps that SVB has already seen three good exits, or repayments, from companies that it has funded in — auto classifieds portal CarWale, microfinance company SKS Microfinance and GETIT. It might encourage others in the banking sector, especially the likes of SIDBI to foray into venture lending.

SVB itself operates in India as an NBFC (non-banking financial company), which restricts the scope of its activities. With 5,000 startups active in Bangalore alone, Indian startups will need many more capital sources to sustain their ideas.