Storm In A Tea Cup 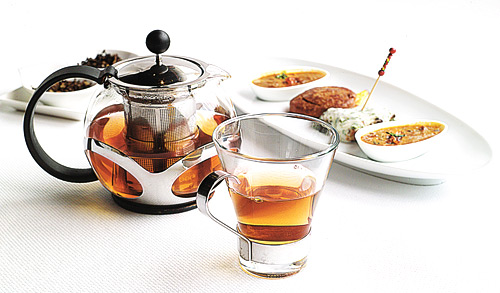 "Black teas from all over the world are rich and full-bodied teas with distinct tannins. They pair especially well with chocolates," says the young tea sommelier, who is responsible for compiling the tea inventory at the hotel.

Varqi chai, the signature blend of the hotel's Varq restaurant, is priced Rs 289 a cup. The single-estate, first-flush Darjeeling tea is blended with basil, a combination that imparts anti-inflammatory properties to the tea, while loading it with antioxidants. Varqi chai is best paired with haleem and kebabs, as the delicate flavours of the foods are complimented by the cleansing properties of basil.

Going beyond roadside tea stalls and Kolkata's proverbial addas, tea is now married with sumptuous dishes. A case in point is My Tea House, a global tea franchise in Bangalore that offers various tea-food pairings. "Our menu goes beyond a snack-tea menu to include healthy breakfast staples and combo meals for lunch and dinner, as well as in-house specialties like teacakes. We have also come up with tea-food pairings," says Satyeindra Vernnekar, director, business development, My Tea House. "Our continental breakfast, which includes toast and omelette, is recommended with Assam tea, since it is a strong-flavoured energy booster," adds the tea entrepreneur. The burgers and pizzas are served here with green tea, while sandwiches are washed down with a special tea infused with honey, lemon and ginger.

break-page-break
Throwing light on the perfect brew, Vernnekar says that premium teas should be brewed and not boiled. Only flavours like the kadak masala chai (strong, spicy tea) should be boiled. "Premium green tea is an experience; it's best enjoyed without sugar or milk," he says.

There's also an explosion of flavours in the tea cup, as tea industrialists come up with new, exotic blends and varieties of tea.

It required patience, imagination and expertise for Rajah Banerjee to patent Silver Tips Imperial, a five-flavoured hand-made tea, which is now considered one of the world's most expensive teas. "After 18 years of experimentation, we came up with the patent Silver Tips Imperial that captures the mystique of the Darjeeling hills. Sold for Rs 54,000 per kilo at the Beijing World Tea Expo auction in September 2006, Silver Tips Imperial set a new benchmark for the best teas in the world. Quality and quantity are not synonymous, hence our tea is dispatched straight from the factory to the connoisseur," says the fourth-generation tea planter-owner of Makaibari Tea Estate, Kurseong, Darjeeling. However, for connoisseurs, who order the tea directly from the garden, it is priced Rs 18,000 per kilo.

Besides its price and world-renowned taste, Silver Tips Imperial has an unmistakable romanticism about it — the leaves are plucked under full moon and the tea is believed to have a lulling effect on the drinker. But that's not all — thanks to its pale green leaves delicately interwoven with silver streaks, the tea is also a visual delight.

Like all rare foods and beverages of the world, Silver Tips Imperial is produced in limited quantity as only six picks are possible between March and June, which is the period between the first and second flush. "We run a homestay, where daybreak starts with an English breakfast accompanied by a first-flush vintage. We then serve a Nepalese meal accompanied by a second-flush muscatel. During teatime, a cup of silver green is sought after for its pick-me-up quality," adds Banerjee, who has chronicled his experiences in his lavishly illustrated book, The Rajah of Darjeeling Organic Tea: Makaibari.

"Let your palate be your guide," said Confucius, the mystic whose country gave currency to the custom of tea drinking. But more than the Chinese, it's the Indian tea connoisseurs who seem to be falling back on the Confucian maxim when it comes to experimenting with tea. Cheers to tea!

The author is a freelance feature writer based in Bangalore