Staying In The Red 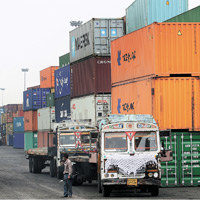 India's exports declined for the 13th consecutive month in October, down 11.4 per cent to $12.5 billion, as the global economic downturn continued to sap demand.

Engineering goods, minerals, mica, coal, tobacco and tea were the laggards, which caused exports to plunge. On the upside, export of drugs, pharmaceuticals and fine chemicals, electronic goods and iron ore improved as compared with the same period last year.

Government officials were prompt to point out that the rate of decline has moderated — the fall of 11.4 per cent this month is the least in 10 months. They cite the early sign of a possible upturn and a "vindication of the green-shoots hypothesis".

This may be a little optimistic. The drop in October was from a much lower base than the previous months: exports started to fall in October 2008, as the world entered one of the worst financial crises it had witnessed in decades. Exports dropped by 12.1 per cent to $12.8 billion in October 2008, compared to $14.6 billion in October 2007. So the moderation in the rate of decline really has more to do with the base effect coming into play than early signs of recovery.

While exports are bound to improve as the US returns to growth after a yearlong contraction, and France, Germany and Japan exit their recessions, it may still take a while before Indian exports go back to the same levels as before the crisis. Exports during the first seven months of the current fiscal (April to October) fetched $90.4 billion, down by a massive 27 per cent, against $123 billion in the corresponding months of last fiscal.