Starting With A Flourish 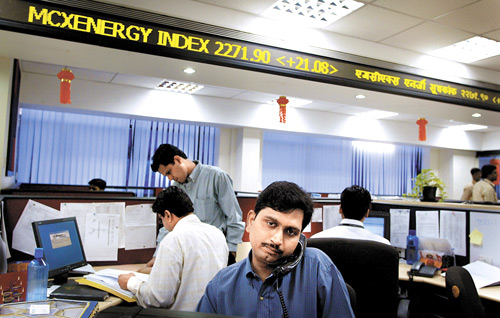 "Apart from achieving the benefits of listing, Financial Technologies wanted to reduce its shareholding to 26 per cent from 31.6 per cent, thus abiding by the regulation and therefore they have offloaded their shares in the market," says MCX managing director Lamon Rutten.

But why did MCX sell the stock so cheap? Says an investment banker: "The sentiment was bad for the IPO market and for the issue to sail through we have intentionally left money on the table. With the secondary market reviving, investors will make good money from the issue."

Sources say investors wanted to exit. But luck seems to be favouring the company that the revival of the secondary market coincided with the MCX IPO; therefore even at the upper price band the issue looks fairly valued. According to grapevine, State Bank of India (SBI) was happy to even sell the stake at Rs 900-940 per share. After the IPO, the bank's stake in MCX will come down to 1 per cent from 5.2 per cent.

According to Singal, another reason why the MCX IPO has garnered such interest is because it is theme-based. "In the past, we have seen markets attributing fancy valuations to unique and scalable business models such as Jubilant Foodworks, Talwalkars and Mahindra Holidays." Similarly, MCX is seemingly unique in its own kind and is the leader in its space with more than 80 per cent market share.

Singal feels the issue will do well because there is no other listed exchange in India and, therefore, after the issue the free float in the stock will remain low. With strong visibility in the business with a minimum 20 per cent growth, even a small demand in the stock from institutional clients could zoom the stock price. The other trigger would be the approval for MCX Stock Exchange to trade equities. It is no wonder that the market is already speculating around Rs 1,600 per share in the next 7-8 months.