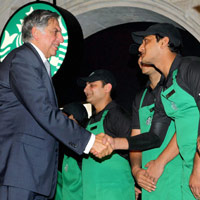 Tata Global shares have nearly doubled this year, partly on hopes about its outlook as the joint venture partner of Starbucks, which has opened three coffee shops in India this year.

However, Morgan Stanley says the contribution from the Starbucks JV will be limited and recommends booking profits on Tata Global.

Read more about Starbucks in India

Morgan Stanley also adds: "Structurally this is one of the weakest businesses in our coverage universe."